Top regulators from Oklahoma, North Dakota and Ohio all agreed on Tuesday that unconventional oil and gas development in their states shows no signs of slowing anytime soon. 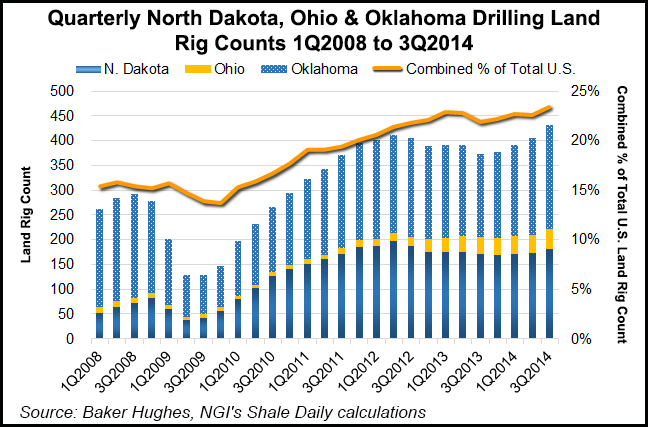 That was the message offered during an update on the state of the Utica Shale play, delivered by Ohio Department of Natural Resources’ (ODNR) oil and gas chief Rick Simmers. Simmers was following tradition at the Interstate Oil and Gas Compact Commission’s annual conference in Columbus, OH, which calls for the host state to provide an update on the industry’s activity inside its borders.

Simmers chose a different tack this year, however, when he called on Tim Baker, director of the Oklahoma Corporation Commission’s Division of Oil and Gas; and Lynn Helms, director of North Dakota’s Department of Mineral Resources; to offer a detailed update on operations in their states to demonstrate how fast Ohio’s Utica Shale is growing in comparison.

In 2010, just three unconventional natural gas wells were drilled in Ohio. The following year, that number didn’t change much, but Simmers said in 2012 operators clearly began shifting from an exploratory and discovery phase into full-scale development. At the time, producers reported 635,876 bbl of oil and 12.8 Bcf of natural gas (see Shale Daily, May 17, 2013). Last year, annual production in the Utica grew to 3.7 million bbl of oil and more than 100 Bcf of natural gas (see Shale Daily, July 2).

Although Ohio’s oil production for all of last year was equivalent to what Texas produces in a day and what North Dakota now produces in roughly three, Simmers said a comparatively small group of wells, currently about 450, account for all the state’s unconventional production, which is mostly dry gas, which he added was growing wetter by the day with increasing condensate production.

“These are significant numbers,” he said. “It’s showing an increase and a fairly rapid increase in production in these Utica wells.”

To date, Ohio has permitted 1,548 horizontal wells in the state, where operators have drilled 1,111 unconventional wells. ODNR expects that 1,800 wells will be permitted by the end of the year, agency director Jim Zehringer told a room full of state regulators and oil and gas executives during Tuesday’s update.

“I think we’re nearing the end of the discovery phase, companies have, for the most part, outlined the boundaries of the play where the production varies,” Simmers added. “Although, there are certain areas of the play that are still in discovery. In a few areas of our play, we are going into that homesteading or development phase; we’re a long ways from maintenance drilling.

“The numbers are growing through a very limited number of wells. We now have about 600 wells that are ready to produce, but only 400-450 of those are actually producing.”

As Ohio’s Utica Shale continues to evolve, Simmers and others at ODNR have looked to North Dakota for guidance on how to deal with rapid growth. Helms said North Dakota’s first true Bakken Shale test well was drilled in 2004, with fewer than 10 wells drilled between then and 2006. After a major discovery in 2006, “that set off what we call the discovery phase and for three years they were drilling and trying to find the edges of the play,” he said.

It wasn’t until 2009 that producers went into what Helms now calls “homesteading mode,” or a development phase.

“It was much like homesteading, where everybody had their 1,280-acre spacing and drilling unit,” Helms said. “They needed to de-risk the leases and hold those by production. We had a high of 218 drilling rigs in May 2012. Everything was being driven by the land holdings and lease expiration. That was the most hectic part of the play.”

With the learning curve and scramble to secure land out of the way, Helms said operators have come a long way and are showing no signs of significantly slowing anytime soon. Helms offered an example of operator knowledge and how densely the formation is being developed in North Dakota, or what he said state regulators there now refer to as “harvest mode.”

Before leaving for the IOGCC conference last week, Helms signed an order to put 28 wells in one 1,280-acre spacing unit.

“We have five productive layers in the Bakken/Three Forks; the best part of the play just continues to get better,” he said. “You’re seeing a system where off of two drilling pads, they’re drilling out two 1,280-acre spacing units — 24-28 wells on each one of those pads, with some going to the north and some going to the south — [the pads] look like little mini long beaches.

“But the beauty of multi-well pads and harvest mode drilling is that the industry’s footprint is still less than 1% of the land surface,” Helms added. “So, stepping out and arranging everything early in the drilling units, and allowing increased density in those units, has allowed the industry to reduce its footprint from the traditional 10-15% to only about 1% of the surface.”

Helms said the permitting rate in North Dakota hasn’t dropped off yet either. The state expects to permit about 3,000 wells by the end of the year. More paralegals are being hired to write pooling and spacing orders, which Helms said have leveled off from a peak of roughly 2,900 to about 2,000, while the permitting department employs nearly 10 people to handle all the paperwork being submitted by operators.

In Oklahoma, where regulators are seeing about 100 permit applications per week, Baker, of the Oklahoma Corporation Commission, said attention is once again shifting toward his state as well.

“The No. 1 play right now is our Mississippian Lime in northern Oklahoma,” he said. “But you’re going to hear a lot more about a new play that started maybe three years ago called the Springer Shale. The Springer sands have been a known source of oil in Oklahoma for many years and now we’re finding it in south-central Oklahoma. That’s a real hot area, we’re seeing a lot of growth in that area and it’s probably still in its infancy.”

The Springer, located in the heart of the South Central Oklahoma Oil Province, as Continental Resources Inc. calls it, has been earning more attention since 2012, when the company unveiled details about its potential. According to Continental’s data, Springer holds an estimated 447 million boe of net unrisked resource potential, with 127 boe net in the oil fairway alone and 320 million boe, or 1.9 Tcfe, combined in the gas and condensate fairway (see Shale Daily, Sept. 18).

There are currently 198 rigs running in Oklahoma, Baker said, and permitting has dropped off only “slightly in the last couple months.

“I have not seen any type of plateau, as far as our spacing rules and regulations go, that seems to be working fairly well, we’re not really having any spacing applications or spacing orders,” he said. “The No. 1 activity, though, is still looking for oil plays. Last year, we completed 1,900 horizontal wells, 1,500 were oil wells and 400 were gas. So that ratio was a reversal from where things have been in the past.”