TransCanada Corp. confirmed on Monday that the $1.2 billion EL Encino-Topolobampo natural gas pipeline in Mexico has begun operating, with capacity to supply 670 MMcf/d to the northwestern states of Chihuahua and Sinaloa. 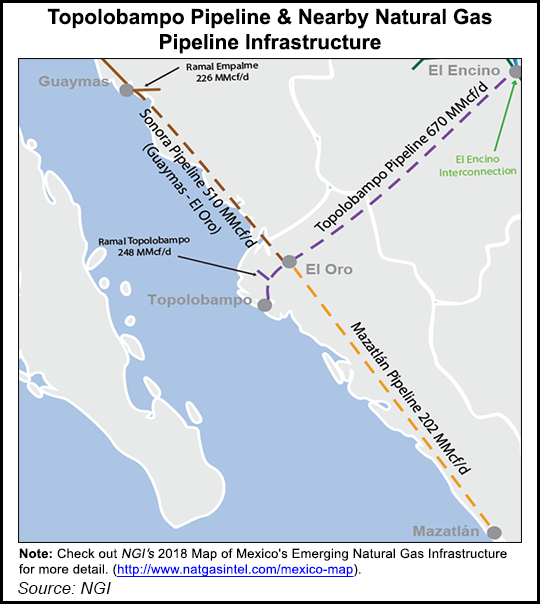 The project’s completion is a welcome bit of good news for TransCanada, which has three other pipeline projects requiring combined investment of about $3.1 billion under construction in Mexico. All three have faced delays, and all are slated to come online this year, according to a June gas pipeline status report by Mexico’s Energy Ministry, the Secretaría de Energía (Sener).

The startup of El Encino-Topolobampo was pushed back from the originally planned date of July 2016. The project “presented some of the most demanding challenges in the country given the geography along the route,” TransCanada said. The project also faced resistance from the Tarahumara indigenous community, according to an internal document of CFEnergia, the fuel marketing arm of Mexican state-owned power utility CFE. The document was reviewed earlier this year by NGI’s Mexico Gas Price Index.

The projects reportedly have faced delays because of the discovery of archaeological sites along their routes, as well as legal injunctions and protests by indigenous groups, the CFEnergía said.

The underwater Sur de Texas-Tuxpan pipeline, which stretches nearly 500 miles through the Gulf of Mexico from Brownsville, in South Texas to the Tuxpan port in Veracruz state, Mexico, was partially invaded by water because of storms. The project is a joint venture with Sempra Energy’s Mexico unit, Infraestructura Energetica Nova (IEnova).

El Encino-Topolobampo is a vital link for gas produced in the Permian Basin in West Texas and southeastern New Mexico to reach northwestern Mexico, the U.S. Energy Information Administration said last week. The project’s startup coincides with that of the $609 million Nueva Era pipeline system, which transports gas from the Eagle Ford Shale in Texas to the northeast part of Mexico.

Delays to Mexican pipeline projects have proven a major headache for oil and gas operators in the Permian, for which Mexico is one of three primary offtakers, along with the domestic U.S. and global liquefied natural gas markets.

Although Mexico President-Elect Andrés Manuel López Obrador (AMLO) has said that his incoming government will not undo the liberalizing energy reforms of current President Enrique Peña Nieto, AMLO has indicated he will side with indigenous groups in sovereignty disputes over infrastructure projects such as pipelines.

“Leaders of about 100 indigenous organizations…stood up publicly and encouraged their communities to vote for AMLO on July 1, 2018,” the Unrepresented Nations & Peoples Organization (UNPO) said last week. “During his electoral campaign, the incoming president has affirmed that a new stage of saving the indigenous lands would commence under his administration.”

UNPO also cited an agreement signed in April between AMLO and Mexico’s Movimiento Indígena Nacional, or National Indigenous Movement, which “includes 13 points touching upon a number of issues such as the recognition of land ownership and the prevention of its privatization by the government…and the recognition of their natural resources as a common good instead of commercial products.”

Permitting delays could also increase under the new government, according to Brilliant Energy Consulting’s Miriam Grunstein, who serves as chief energy counsel.

“One of the agencies that has caused the most delays and transaction costs has been the Energy Safety and Environmental Agency,” i.e. the Agencia de Seguridad, Energía y Ambiente, or ASEA, she told NGI’s Mexico Gas Price Index earlier this month. “If they give it a very low budget, or if they put someone in the leadership that slows down the permitting, the licensing [and] the approvals, the transaction costs for companies could become unbearable.”

Since 2012, Mexico as of June had added 3,392 kilometers (2,108 miles) of gas pipelines to the national network, according to authorities, with another 8,552 kilometers scheduled to be added by the end of 2019.