Howard Energy Partners (HEP) cited a variety of reasons Wednesday for a delay in starting up the Nueva Era pipeline, which would transport natural gas produced in the Eagle Ford Shale to markets in northern Mexico. 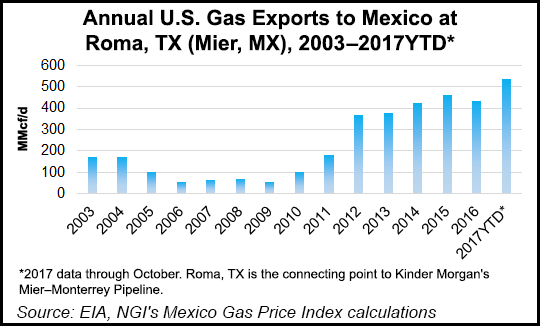 Nueva Era Pipeline LLC, a joint venture between HEP and Mexico’s Grupo Clisa, is developing the pipeline, which is to have 600 MMcf/d of transport capacity. The minimum 30-inch diameter, 190-mile pipeline is going to directly connect a natural gas hub in Webb County, TX, to power plants in the Monterrey, Mexico area. The system is anchored by a 504 MMcf/d contract with the Comision Federal de Electricidad, Mexico’s state power company.

HEP spokeswoman Meredith Hargrove Howard told NGI that the project is about 80% complete, and should enter service in 3Q2018. Construction of the pipeline began in early 2016 and was originally scheduled to enter service in the second half of 2017.

“The updated in-service date reflects the needs of downstream off takers, adjustments required by a developing regulatory framework, and general force majeures related to some of last year’s extreme weather,” Howard said Wednesday.

In a note to clients on Tuesday, Mizuho Energy analyst Tim Rezvan said the news that Nueva Era would be delayed “underscores the near-term challenges we see for Mexico to increase gas pipeline imports from the U.S. This comes amid increasing uncertainty on stated in-service dates for announced projects, due to indigenous protests and uncertainty on timetable feasibility, especially in high-crime areas,” he wrote.