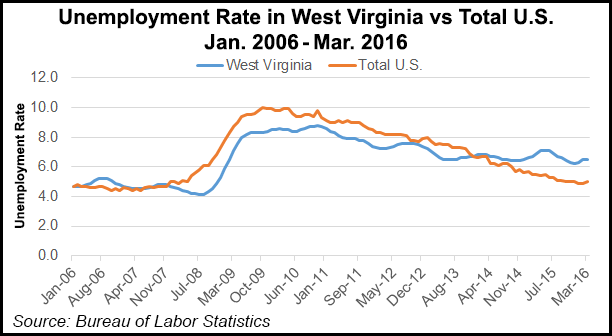 Nearly two months into the budget impasse, Gov. Earl Ray Tomblin’s administration last week warned of a “worst-case scenario,” as Revenue Secretary Bob Kiss said personal income tax collections would again come in far below projections this month. Tomblin himself issued a statement and said the state must push for a balanced budget and continue work to diversify the economy there.

“Today’s announcement by Standard and Poor’s is disappointing, however it is not entirely unexpected as other states whose economies are largely dependent on the energy sector have experienced similar actions,” Tomblin said. “If we don’t take proactive steps to develop a stable path forward that does not rely on one-time monies and even deeper cuts to cover long-term and recurring needs, the economic and budget challenges facing our state will only get worse.”

The West Virginia legislature concluded this year’s 60-day regular session in March without passing a budget (see Shale Daily, March 15). The state faces a nearly $400 million budget deficit for the current fiscal year (FY), which ends in June, and remains gridlocked over how to balance the fiscal 2017 budget. The state Senate shelved a House-crafted plan that would have relied on $72 million in spending cuts for state agencies, while the House of Representatives rejected a Senate proposal that would have raised $139 million in tax increases.

While the ratings agency noted that access to sizable rainy day funds keeps the outlook on all of the state’s ratings stable, it said the use of those reserves and other one-time measures could forge deeper fiscal pressures in the future. The precipitous decline in coal exports, producer bankruptcies and oil and gas projects such as Odebrecht’s proposed ethane cracker that have been delayed paint a clear picture of the state’s declining economy, Standard & Poor’s said (see Shale Daily, April 23, 2015).

In his remarks, Kiss noted that nonresident withholding taxes are expected to be particularly hard hit this month, as declining royalties on mineral rights owned by out-of-state residents are anticipated to come up short and the payroll withholding of out-of-state oil and gas workers is again expected to decline.

Through the first nine months of FY 2016, general revenues were $146.4 million under estimates in the state, Standard & Poor’s said. The largest component of the revenue shortfall is severance tax collections, which are off by $141.8 million, or 39% below FY 2015 levels.

West Virginia also had the second highest unemployment rate of any state in the country behind Alaska at 6.5% in March. Between December 2014 and December 2015 the steepest losses came for the mining sector, which includes coal and oil and gas production. Sector employment declined by 12.6% during that time, losses that have only been deepened by employment declines in the broader economy, Standard & Poor’s said.