After a promising start, natural gas bulls came up short in extending their streak as lackluster weather demand and indications of steep losses ahead from the liquefied natural gas (LNG) sector stopped the rally dead in its tracks. After touching a $1.889 intraday high, the June Nymex gas futures contract slid for the remainder of Wednesday’s session and ultimately settled at $1.771, down 5.9 cents on the day. 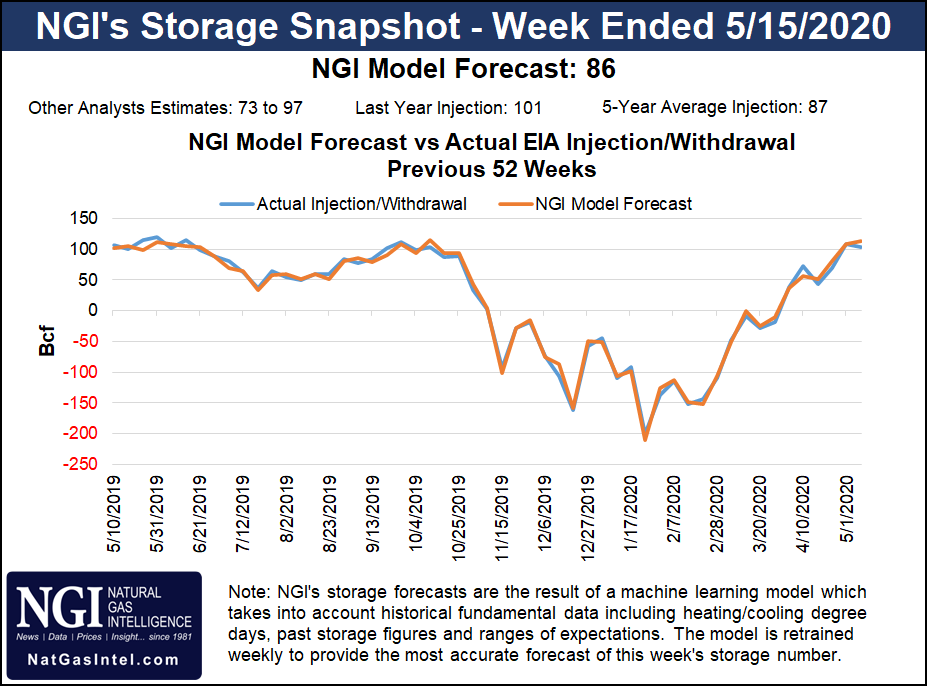 Spot gas prices were mixed as most areas of the United States are forecast to see rather comfortable temperatures for the end of the week, while some southern states were already seeing increased heat. NGI’s Spot Gas National Avg. stayed exactly flat at $1.690.

Little has changed in the latest weather models, with broad coverage of above-normal temperatures taking hold for a good portion of the country for the next couple of weeks and into the early part of June, according to Bespoke Weather Services. For now, however, this does not boost demand much, but the longer the warmer-than-normal pattern holds, the more it gradually becomes bullish in terms of gas-weighted degree days, the firm said.

“…This is what we expect to see as we move forward into what we believe will be another hot summer for the nation as a whole, as the global base state moves toward the La Niña side of the spectrum over the next several months,” Bespoke said.

The end of the weather model runs, around June 5-6, teases hotter patterns trying to gain momentum as upper high pressure strengthens, according to NatGasWeather, but this would need more data to come on board with it.

Given that truly intimidating heat has so far remained at bay this injection season, Mobius Risk Group pointed out that “there is a degree of uncertainty on how strong overall power load and gas market share will be.”

For now, the string of above-average storage builds expected this month is likely to be temporarily stalled as the next government storage report reflects last week’s cold blast that hit the East Coast. Analysts expect the Energy Information Administration (EIA) to report an injection in the upper 80 Bcf range on Thursday for the week ending May 15, which compares with the 101 Bcf injection recorded by the EIA last year for the week and the five-year average injection of 87 Bcf.

Last week, the EIA reported a 103 Bcf injection for the week ending May 8, boosting inventories to 2,422 Bcf, about 800 Bcf above year-ago levels and 413 Bcf above the five-year average.

Energy Aspects issued a preliminary estimate for a 94 Bcf injection based on “an estimated 0.5 Bcf/d week/week decline in production and a projected 1.5 Bcf/d increase in demand, driven by increased heating needs week/week.”

NatGasWeather, which pegged the EIA build at 87 Bcf, said degree day totals for Thursday’s report are much larger, yet the build is expected to be near normal, “suggesting further tightening of the supply/demand balance will be needed in the weeks and months ahead if to meaningfully reduce current hefty surpluses of 413 Bcf in the absence of impressive summer heat.”

The EIA’s storage report is scheduled for 10:30 a.m. ET Thursday.

After this week’s EIA report, the market will brace for a resumption of well above-average storage injections amid the coming spate of mild weather in key demand regions. While there is no doubt the supply/demand balance is finally tightening, thanks to intensifying heat in the southern United States and lower gas production, Bespoke said the risk in completely filling storage this fall has not been eliminated.

This is something the Nymex futures curve is expressing as well, “given how wide spreads are from the front to the winter-dated contracts,” the firm said. Indeed, the November-March winter strip stood Wednesday at a $1 premium to the June Nymex contract.

“Should we continue to tighten as the economy tries to open up more, that, along with a hotter summer, would send prices easily higher,” Bespoke said.

Supporting this theory is increased gas demand for ethanol production. Genscape Inc. said that after sample volumes dropped as much as 38% from the five-year average due to ethanol demand destruction related to Covid-19, demand has been growing in recent weeks. From a high of 580 MMcf/d in mid-January, the firm’s sample gas demand from ethanol plants dropped to as low as 316 MMcf/d on May 5. However, over the last two weeks, this number has trended upward and reached 386 MMcf/d for Thursday.

However, LNG demand stands to throw some major hurdles into the path to higher prices and likely had a hand in Wednesday’s pullback in futures pricing. Although current U.S. liquefaction capacity is around 9 Bcf/d, terminals are running well below normal and have wiped out a good portion of demand. In fact, feed gas deliveries have been consistently tracking below 6 Bcf/d since May 12 and on Wednesday, were at around 5.55 Bcf/d, according to NGI’s U.S. LNG Export Tracker.

Rough waters are likely to persist. Shipbroker Poten & Partners said that 25 U.S. LNG cancellations are expected in July and more than 20 are expected in each month from August to October given the uneconomic spread between the United States and key markets overseas.

“These numbers will still be high through August, September and October, with October peaking out at about 27 cancellations,” said Poten’s Kristen Holmquist, forecasting manager, during a webinar last week. “Cancellations could be higher. In our supply and demand balance, we still show a little bit of excess supply, so there might even be more LNG taken out.”

Spot gas prices were mixed Wednesday with gains and losses limited to around a dime at the vast majority of market hubs across the country.

This comes as a slow moving weather system was forecast to stall across the east-central United States a few more days with heavy showers and thunderstorms, according to NatGasWeather. While temperatures are expected to remain “rather comfortable” in the 60s and 70s, a second weather system was bringing rain and snow showers to the West with slightly cooler temperatures, the forecaster said

Over the central United States and Texas, NatGasWeather said that high pressure was to result in “very warm to hot” daytime temperatures in the 80s and 90s, with the most intense heat concentrated in West Texas.

That heat appears to be boosting demand and prices in the Permian Basin, where Waha next-day gas climbed 6.0 cents day/day to average $1.710 and other regional points followed suit.

Henry Hub picked up 3.5 cents to $1.830, with similarly small gains seen across the Southeast. Appalachia prices continued to weaken given the mild weather in place across the eastern United States. Tennessee Zone 4 Marcellus cash was down 9.0 cents to $1.265.

Meanwhile, Texas Eastern Transmission (Tetco) released an update regarding the force majeure in the wake of an explosion on its 30-inch diameter system Line 10 near Owingsville, KY. Notably, the pipeline expects to complete construction and preparations for Line 25 to return to service between May 22 and 24.

“Capacity at Owingsville remains at zero, however, a significant amount of gas is reported to flow south through the compressor, up to 480 MMcf/d since the explosion,” said Genscape analyst Josh Garcia. “This could be due to upstream and downstream compression.”

On the West Coast, prices mostly moved within a nickel of the previous day, with a few exceptions. SoCal Citygate dropped 9.5 cents day/day to average $1.825. Points along the El Paso Natural Gas system in the Rockies, meanwhile, climbed more than 5.0 cents on the day.

European liquefied natural gas (LNG) imports are on track to beat last year’s levels, driven in part by strong deliveries from the United States earlier in 2020, according to data intelligence firm Kpler.  The firm said this week domestic gas exports to Europe have nearly doubled this year, thanks in large part to a particularly…