The team behind a mid-scale liquefied natural gas (LNG) export project in Plaquemines Parish, LA, which failed to gain traction years ago is trying to advance again with new investment capital and offtake agreements. 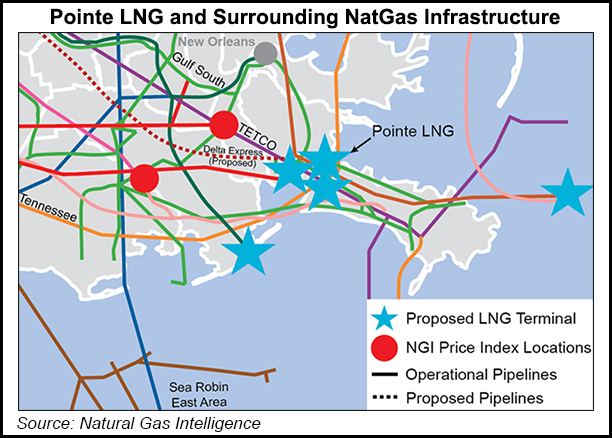 Co-founders Tom Burgess and Jim Lindsay, who had previously secured funding in 2014 for Louisiana LNG along 600 acres of the Mississippi River’s east bank, said they now need about $4 billion to develop the project, renamed Pointe LNG.

The potential Pointe has more than 9,200 feet of riverfront, which could eventually enable an expansion from 6-12 mmty, in addition to a deepwater port with a depth of 50 feet-plus to accommodate the world’s largest LNG vessels.

The company has enlisted Whitehall & Co. as its financial adviser and said it expects to close on the initial $56 million of development capital by 3Q2020. A final investment decision is targeted for mid-2022, and commercial operation is scheduled for 2026.

Pointe’s co-founders said the site’s features would help keep costs down, but the revamp comes at a time when the world is awash in cheap gas supplies. The glut has only been exacerbated by the Covid-19 pandemic, which has reduced demand for the fuel.

The market has also made it more difficult for second wave U.S. LNG export projects to secure financing and long-term supply agreements, given abundant supplies, travel restrictions imposed under the virus outbreak and economic uncertainty. As a result, a number of projects along the Gulf Coast and elsewhere that are further along in the development process have been delayed or sold.

Pointe stalled in 2015 when Parallax Enterprises LLC acquired predecessor Louisiana LNG Energy LLC. Parallax later partnered with the largest U.S. gas exporter, Cheniere Energy Inc., to advance the facility, but the relationship soured over projects in Louisiana in a broader dispute that involved other parties, including a predecessor to rival Tellurian Inc.

Pointe said after Cheniere and Parallax were unable to complete development, the company was able to return to the site and resume development as Pointe LNG LLC. The Federal Energy Regulatory Commission cleared the company to again start the pre-filing process in September 2018.