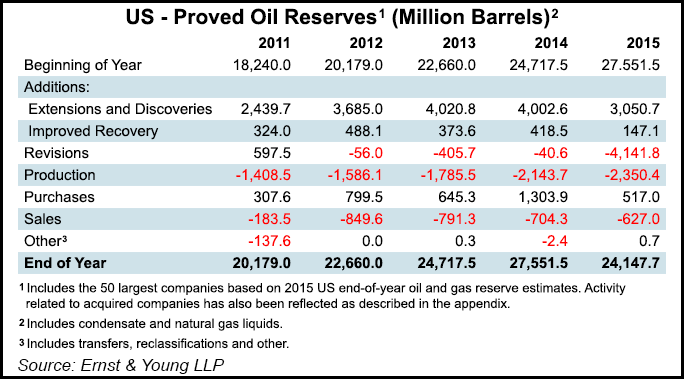 “The significant spending cuts and downward reserve revisions reported in 2015 are illustrative of a structural shift taking place in the industry as a result of abundant oil,” said EY’s Herb Listen, assurance oil and gas leader in the United States. “No longer are capital investment decisions driven by the pursuit of growth; instead the industry and those investing in it are progressively more focused on cash flow and returns.”

Stagnant commodity prices bit into revenue, which, like spending, fell 41% overall to $129.8 billion. The “all sources” production replacement rate for gas was a minus 192%, and for oil it was minus 45%. For natural gas, proved extensions and discoveries declined 37% from 2014 to 18.7 Tcf. Antero (2.3 Tcf), EQT (2.0 Tcf) and ExxonMobil (1.2 Tcf) posted the largest extensions and discoveries.

“Low natural gas prices over the study period contributed to the study companies recording over 71 Tcf of downward reserve revisions from 2011 through 2015, with a staggering 40.0 Tcf recorded in 2015,” researchers said. “The peer groups were evenly impacted, with each group recording downward revisions equal to about 20% of their beginning-of-year reserves.”

Despite low prices over the study period, gas production steadily increased each year, with the largest gains unsurprisingly by three of the largest Appalachian-focused independents: Southwestern, Antero and EQT. All three posted production of 100 Bcf-plus in 2015.

The large independents also led the way for gas production over the five-year period, with output increasing by one-third from 2011 to 2015, while the integrateds and independents saw declines in production.

The significant decline in overall revenue for the 50 E&Ps, coupled with substantial property impairments, resulted in net losses totaling $112 billion in 2015. The largest impairments were reported by producers using full-cost accounting, which requires a ceiling test to be conducted each quarter using the 12-month average of the first-day-of-month reference prices. Property impairments, including ceiling test charges, totaled $141.6 billion.

“Amid low prices, declining hedges and the drastic drop in revenues, many U.S. producers are experiencing rating downgrades and lower reserve base borrowing limits and, consequently, less cash flow and liquidity,” said EY’s Mitch Fane, oil and gas transactions leader in the Southwest region. “Already, bankruptcies and restructurings have increased as have dividend and interest payment deferrals. This trend is expected to continue amid lower-for-longer oil.”

“While many expect an uptick in asset sales due to oil and gas companies’ need for capital, the most valued E&P assets in this current environment are frequently the lifeblood of their companies’ operations,” Fane said. “As a result, the bid-ask spreads for quality, producing properties and declining values of some non-producing properties have hindered transactions and private equity investment thus far.”

Exploration spending declined 28% from 2014 to $17.1 billion from $23.6 billion, while development spending fell 31% — most evident in reduced drilling activity. The number of net exploratory wells drilled declined 41% and was off 31% for development drilling.

“The independents and large independents accounted for the most significant cuts to exploration and development spending, while the integrateds actually increased exploration spending by 9%,” Listen said. “Looking forward to 2016 and 2017, the full range of U.S. producers will face continued pressure to reduce spending if prices remain at current levels.

For the oil majors, exploration spending actually increased overall from 2014 by 9%, lifted by Royal Dutch Shell plc’s activity in the Gulf of Mexico and offshore Alaska. Development-wise, ExxonMobil led the group with spending of $7.185 million, followed by Chevron Corp. at $6.275 million and Shell at $5.72 million.