Gastar Exploration Inc. could add a third rig in 2017 as it continues delineating its acreage in the Sooner Trend of the Anadarko Basin, mostly in Canadian and Kingfisher counties (aka, the STACK). 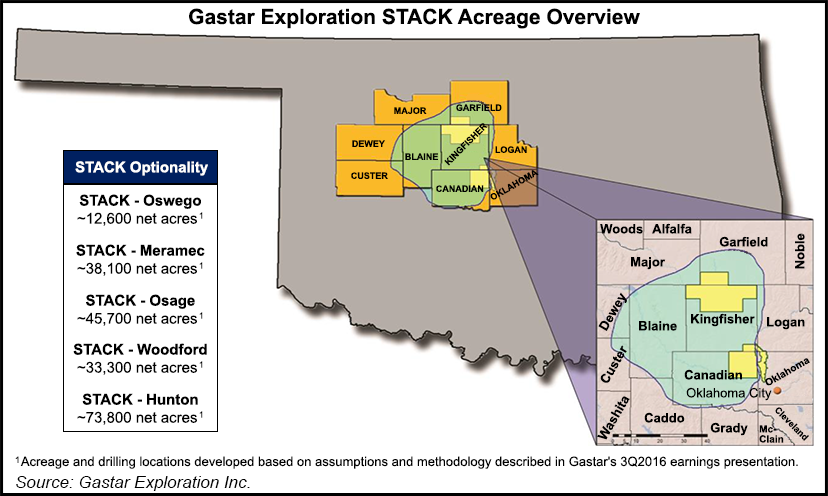 The Houston-based exploration and production (E&P) company left the Appalachian Basin to become a STACK-focused pure-play earlier this year. Last month, Gastar entered into a 60-well development agreement with private equity backers to help delineate its Midcontinent acreage while protecting its balance sheet. At the same time, Gastar announced the sale of noncore assets in Canadian County for $71 million.

Management said during a 3Q2016 conference call recently that the E&P could add a third rig in 2017 focused on developing the Osage and Oswego formations, with the wells under its development agreement focused mostly on the Meramec.

Porter said its results so far from the Oswego suggest Gastar will “probably want” to target the formation “outside the development agreement just for our interest.”

Gastar reported commencing flowback in late September on its first operated Osage and Oswego wells. The McGee 29-1H in the Osage was drilled with a 4,200-foot lateral and a 24-stage completion using roughly 4.6 million pounds of proppant for approximately $4.4 million.

The Tomahawk 7-1H in the Oswego used “a 22-stage nitrified acid completion with very light proppant use” costing roughly $2.7 million.

Management said it’s too early to provide production data for the wells.

The Oswego well was “drilled without any issues,” Porter said. “We saw a lot of matrix porosity in the Oswego. The well is flowing back. It’s making good oil volumes. We just don’t think it’s reached the peak yet, so it’s just not ripe enough to announce. But overall, we’re pleased it. Where we are in the Oswego is just a little bit thinner than where Chesapeake [Energy Corp.] is, but at $2.7 million cost, and even if you’re only at a 250,000 boe-type EUR [estimated ultimate recovery], you’re still going to have” an internal rate of return at current strip pricing “in the 50% range or higher.”

Gastar also reported updated production data for its Holiday Road 2-1H that went into production earlier this year in the Meramec. The Holiday Road well reached a peak production rate last month of 654 boe/d (75% oil), Porter noted. “That well is a good lesson that it is easy to draw the wrong conclusion from very early production data in the STACK.”

Gastar said it expects to see capital expenditures of $13.4 million for the rest of 2016, bringing the full-year capital budget to $60.8 million.