Stabilis Solutions Inc., which produces and distributes small-scale liquefied natural gas (LNG), said Wednesday it has three long-term sales contracts that represent up to 40% of the liquefaction capacity at its George West, TX, plant. 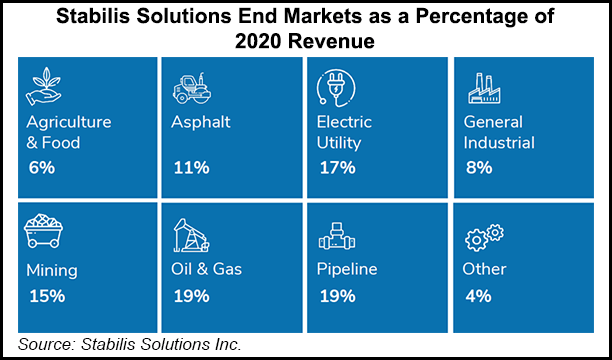 The company said the contracts are with customers in the infrastructure and mining markets. Combined with existing contracted and uncontracted sales, Stabilis projects that utilization at its George West Plant should be near 100%. The plant is about 57 miles from Corpus Christi on the coast.

“After a brief pandemic-driven slowdown in 2020, customer inquiries and sales have grown rapidly, culminating in record fourth quarter 2020 sales at Stabilis,” said CEO Jim Reddinger.  “We believe that these new orders will allow our LNG production facility to operate near full capacity for the foreseeable future.”

The company provides LNG to customers from the George West Plant and 25 other third parties throughout North America. Reddinger noted that the company’s Texas plant is most efficient when it’s running at or near capacity.

One of the customers in the latest deal is a highway paving contractor that uses LNG to create the heat required to produce finished asphalt. The other companies operate Texas-based sand mines serving the industrial and energy markets.

Farther East, NorthStar HoldCo Energy LLC and Pivotal LNG, which jointly own the small-scale JAX LNG terminal in Jacksonville, FL, said the project to triple liquefaction capacity remains on track to be in service by the end of the year.

The 120,000 gallons/day JAX facility has been online since 2018 and serves markets in the Southeast and Puerto Rico. The expansion project would boost the terminal’s output to 360,000 gallons/day and double storage capacity to 4 million gallons. NorthStar also said in an update Thursday the 5,400 cubic meter LNG bunkering and transport vessel Clean Canaveral remains on track to be in service before the end of the year. The terminal has already completed 150 LNG deliveries to the Clean Jacksonville bunker barge since entering service.