Stabilis Solutions Inc. reported a sizable boost in delivered LNG volumes during the second quarter and strong revenue thanks to sky-high commodity prices, but management said there was still work ahead to push back on inflationary impacts and improve earnings. 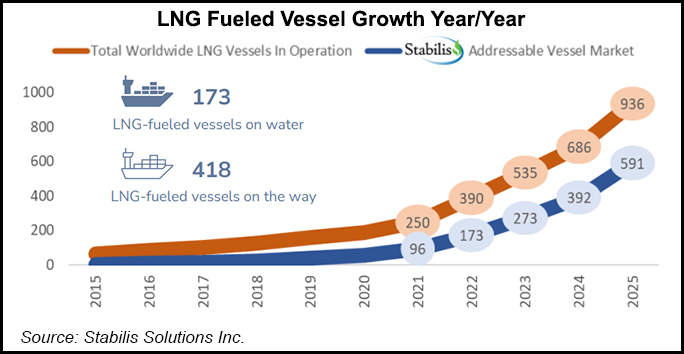 Proving LNG and other alternative fuels to the aerospace industry has been an emphasis for Stabilis’ growth over the past several quarters. Ballard said its aerospace business grew to capture 10% of the firm’s revenues during 2Q2022.

However, Ballard said, Stabilis is also still working on ways to better capitalize on its growth by reducing power, gas and transportation costs.

“Over the past several months, our commercial and operational teams have worked hard engaging with customers on price increases to offset realized inflationary pressures and optimize our operations,” Ballard said.

Ballard said optimizing LNG profitability would be continuous, “not a finite exercise.” Part of that strategy, he said, would mean expanding its commercial activities to have “better consistency of takeaway capacity” that would allow Stabilis to have more control over its power and raw material costs.

Ballard said the company could also announce possible expansions of its marine bunkering business to new locations during the year, given an observed increase in demand. Stabilis has an LNG facility in George West, TX in the Eagle Ford Shale where volumes can be loaded on tankers and transported to the clients on the Gulf Coast. Last year, it also acquired a facility in Port Allen, LA.

Like with aerospace, Ballard said marine bunkering represented a growth opportunity that Stabilis could leverage to improve profitability, but it would be a disciplined, incremental expansion.

“Given the nascent LNG marine bunkering infrastructure in the U.S., it is important to ensure we remain nimble and flexible as we think about our long term approach to serve this market,” Ballard said.

Stabilis reported a 2Q2022 net loss of $2.2 million (minus 12 cents/share), compared with a $1 million net loss in the year-prior period.