Asian liquefied natural gas (LNG) offtakers that have contracts with Malaysia’s state-owned Petroliam Nasional Berhad, aka Petronas, are looking to cover peak winter demand after cargoes were canceled and deferred from the Bintulu LNG complex in Sarawak. 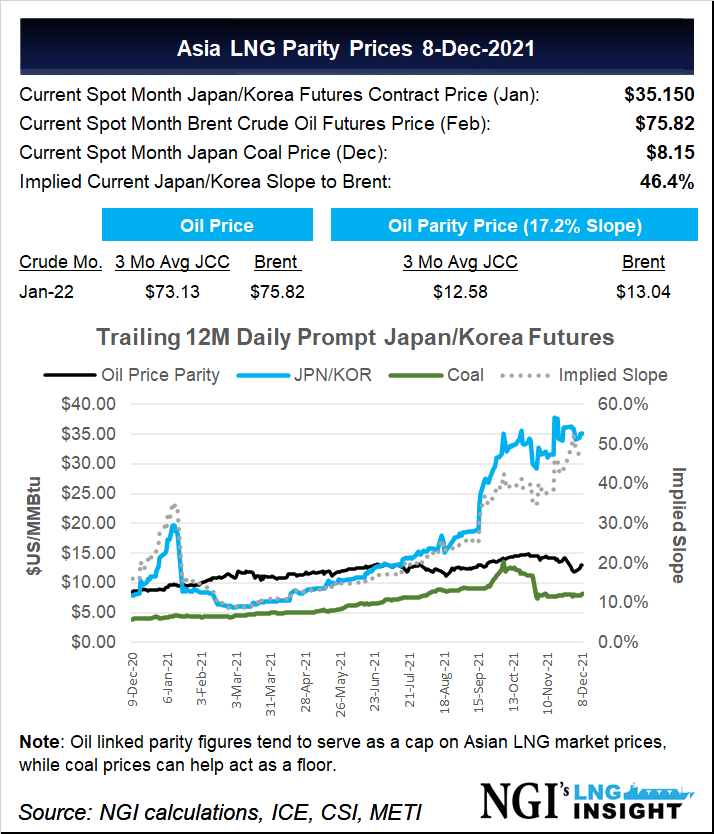 With a colder-than-normal winter predicted for Asia, plus recent unplanned outages at  Australia’s Gorgon LNG and the Prelude floating LNG (FLNG) vessel, Japanese and Korean buyers are back in the market to seek replacement cargoes.

The Mubadala Petroleum-operated Pegaga would be one of the key gas suppliers to Bintulu, with first gas originally scheduled for the end of this month. Petronas plans to install a temporary Mercury Removal Unit (MRU) at Pegaga in January and a permanent unit in November, according to media reports.

The Bintulu complex includes three trains each at Malaysia LNG (MLNG) and MLNG Dua (MLNG2), two trains at MLNG Tiga (MLNG3), and a ninth train at Petronas LNG 9. Petronas had informed MLNG3 offtakers in September that eight cargoes for November-January delivery would be delayed or canceled. Petronas also said there could be additional cargo cancellations for February and March deliveries.

Petronas told offtakers from MLNG2 for the first time in October that it would exercise its downward quality tolerance (DQT) rights for December-March deliveries. DQT gives the right for a supplier to offer reduced contracted volumes.

Petronas has not publicly commented on the negotiations. However, CEO Tengku Muhammad Taufik has acknowledged the DQT requests. He said in September during remarks at the Gastech Exhibition and Conference in Abu Dhabi that “DQT is part of the contract that is usually negotiated and agreed with the customers…We are negotiating…and there will be retiming and rescheduling of the deliveries that will be agreed with the customers.”

If Petronas has not declared force majeure over the mercury issues, the national company would likely have to meet its supply obligations under a take or pay clause. It could meet obligations from its supply or by purchasing cargoes in the spot market. That would be an expensive proposition given the staggering difference between current contract and spot prices in Asia, lead consultant David Hewitt of Hewitt Energy Perspectives told NGI.

Tokyo Gas Co. Ltd., Japan’s largest natural gas utility,  has acknowledged there could be an impact on winter supply with the Malaysia LNG reduction. Still, CEO Takashi Uchida in late November said at a Tokyo press conference that management is confident there will be enough supply during Japan’s peak winter demand season.

“We understand that [the notice] has been sent not just to us but to other companies and countries,” Uchida said. “These companies are still in the midst of negotiations with Petronas so that we cannot say how much impact we will have at this moment…

“We are working with gas-producing countries to receive as much LNG as possible in winter, and we expect to fill up our tanks in  December in order to get through January, February and March…and we expect to be able to come through even in a considerably severe winter.”

Production outages at Gorgon LNG and the Prelude FLNG vessel have added to the concerns for the Asia-Pacific market. Chevron Corp., the operator of  Western Australia’s 15.6 mmty Gorgon terminal, shut down its 5.2 mmty Train 3 early this ninth for repairs on its dehydration unit. Several cargoes are expected to be canceled into the first half of January.

Train 3 was shut earlier this year for inspection, and it came back online over the summer. Train 1 had been shuttered since mid-November to fix a minor gas leak, and only recently restarted.

Shell plc temporarily suspended production of its 3.6 mmty Prelude FLNG plant after a fire caused a power outage at the facility in early December. Prelude plans to suspend activities until the main power is restored, but Shell has not indicated how long the shutdown could last, nor how many cargoes may be impacted. Prelude was previously offline from February 2020 to last January because of technical issues.

Although Gorgon Train 1 is back online, three cargoes were lost during the outage. And with the same issues at Train 3, another three cargoes could be off the market in the first half of December, Hewitt said. The Prelude outage removes one more cargo per week, putting yet more pressure on the spot market given the challenges at Bintulu, Hewitt added.

Adding to supply woes in the region, Brunei’s LNG production has fallen this year because of “limited gas supply and maintenance activities at one of the LNG plant facilities,” according to a Brunei government report  LNG production has declined from its peak of 9.6 billion cubic meters (Bcm) in 2011 to 8.4 Bcm in 2020. The plant delivered 5.4 Bcm to Japan last year, Brunei’s top customer.