The Haynesville Shale and the Appalachian Basin will lead continued growth in domestic natural gas production from November to December, with output from seven key U.S. regions set to rise more than 500 MMcf/d month/month to nearly 96 Bcf/d, according to updated modeling from the Energy Information Administration (EIA). 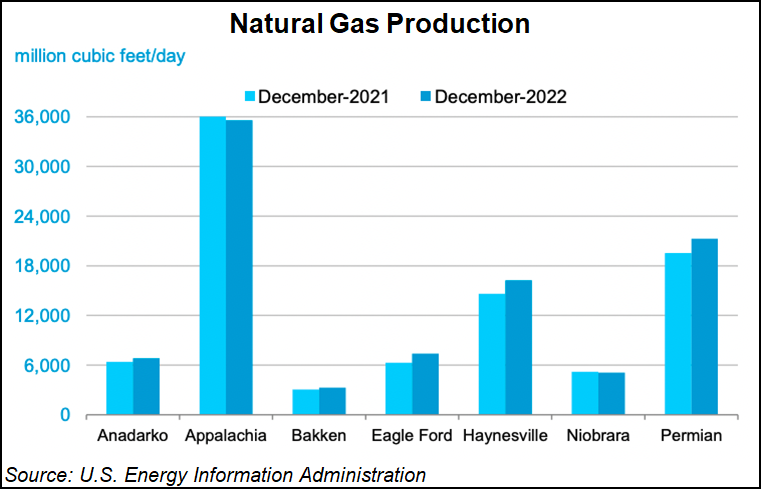 The seven regions tracked in EIA’s DPR include the Haynesville and Appalachia regions, the Anadarko and Permian basins, and the Bakken, Eagle Ford and Niobrara shales.

The Haynesville is expected to post the largest monthly increase from November to December at 174 MMcf/d, raising total output from the region to 16.257 Bcf/d. Output from Appalachia is set to climb 135 MMcf/d to 35.569 Bcf/d, the DPR data show.

Natural gas production gains are also expected from the Permian (up 125 MMcf/d), Eagle Ford (up 79 MMcf/d), Bakken (up 29 MMcf/d), Niobrara (up 18 MMcf/d) and Anadarko (up 4 MMcf/d) regions from November to December, according to the agency.

Meanwhile, the total number of drilled but uncompleted (DUC) wells across the seven regions rose eight units to 4,408 between September and October, according to EIA’s updated count.

The Niobrara added 21 DUC wells to its backlog month/month, with the Haynesville adding 11. The Permian (down 13), Anadarko (down five), Appalachia (down three) and Eagle Ford (down three) regions all drew down their respective DUC backlogs month/month, according to EIA. The Bakken DUC count held flat at 494, the agency said.