Against the backdrop of rising renewable electric generation and the need for more balancing mechanisms, Spire Energy Inc. is close to completing the first phase of a planned natural gas storage expansion near the Opal Hub in Wyoming. 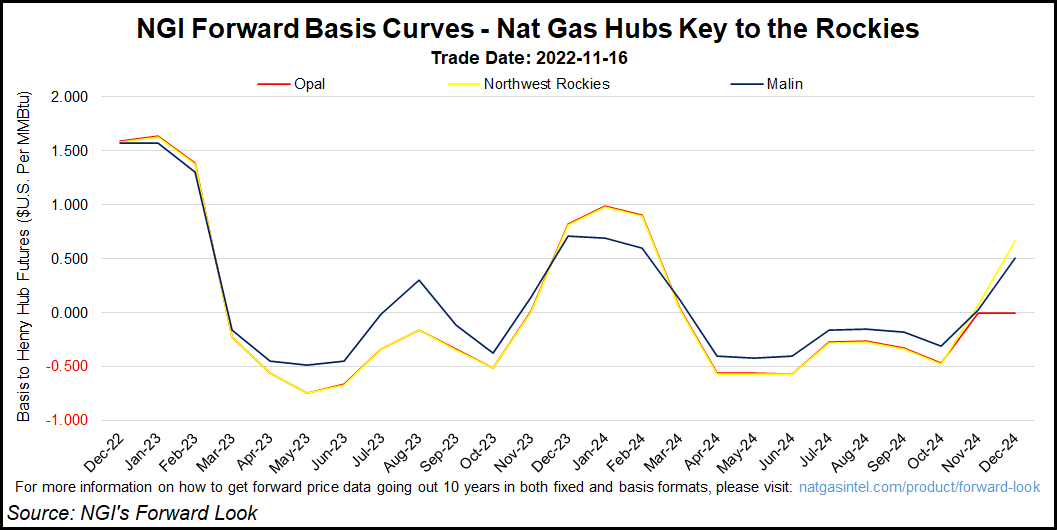 Spire Storage is working to expand capacity to 39 Bcf from 23 Bcf to meet growing demand in the Rockies and western United States. The facility connects to the Kern River, Northwest Pipeline, MountainWest, Overthrust and Ruby systems and serves natural gas and electric utilities, pipelines, industrial manufacturers, producers and gas marketers.

“Our strategy for owning and expanding the facility is to support the energy transition out West,” Spire Storage President Scott Smith told NGI.

Smith noted that the boom in renewables for electric generation in the West has resulted in a change in consumption patterns for natural gas as more gas is needed to serve as a backstop for renewable generation.

“With generation ramping up and down,” such as for wind generation, “that requires pipeline linepack and storage,” Smith said. “That’s a big driver.”

This dynamic has played out over the past few years in California, as an ongoing drought has reduced hydroelectric power and increased the call on natural gas during scorching summers and frigid winters. Smith said the Pacific Northwest also is experiencing a rise in natural gas consumption.

“There’s a significant amount of gas-fired generation that has a lot of seasonality to it,” he said.

Most of the storage expansion activities this summer included “dirt work” to prepare for next summer’s more aggressive buildout, according to Smith. The project includes adding injection and withdrawal wells, compression, pipeline infrastructure and gas processing capability.

Harsh winters in Wyoming usually require most construction to be done between April and October. Since Spire’s storage facility sits at an elevation of 8,000 feet,  it’s “challenging” and “more expensive” to conduct work in the winter, Smith said. However, Spire is procuring equipment for the next round of activities, with bids for construction-related work planned early next year.

Spire has put a $195 million price tag on the expansion, with inflation and other costs factored into the budget. Thus far, labor hasn’t been a concern as in other sectors of the oil and gas industry, according to Smith. Management is confident it has “access to qualified contractors who can do the work. Obviously, things can change, but we try to stay in touch in real time to make sure everyone is aware we have the work coming up next year.”

Partial operations for the expansion are set to ramp up in the winter of 2023-2024, with the added capacity fully online within a year.

“The bulk of facilities will be put in place next year, and then we’ll have the following summer to put in the remaining facilities,” Smith said. The “stair step” approach would allow the market to benefit from the expansion as capacity becomes available. “We have some of the added capacity already committed, but the bulk has not been sold.”

An open season for additional capacity is likely to take place next fall, Smith said. By then, construction would be ongoing, with more certainty of volumes.

Separately, Spire on Wednesday issued its fiscal fourth quarter and fiscal 2022 (FY2022) earnings. Capital expenditures (capex) for FY2022 were $552 million, down from $625 million in the prior year following lower investments in gas utilities and the Spire Storage and Spire STL Pipeline LLC.

The 65-mile long Spire STL system carries natural gas to the St. Louis area from Illinois. The pipeline began operating in 2019, but it came under scrutiny and the certificate was vacated. Spire STL continues to operate under a temporary certificate while FERC considers approval of a permanent certificate. The Federal Energy Regulatory Commission issued a positive environmental impact statement in October, which management said “clears a potential holdup in the recertification process.”

Looking ahead to FY2023, capex is expected to be around $700 million, with $150 million earmarked for midstream businesses, primarily the storage expansion.