Citing persistent flood issues in a portion of its route, Spire STL Pipeline LLC filed a request with FERC earlier this month to begin service on its 65-mile, 400,000 Dth/d natural gas transmission pipeline. 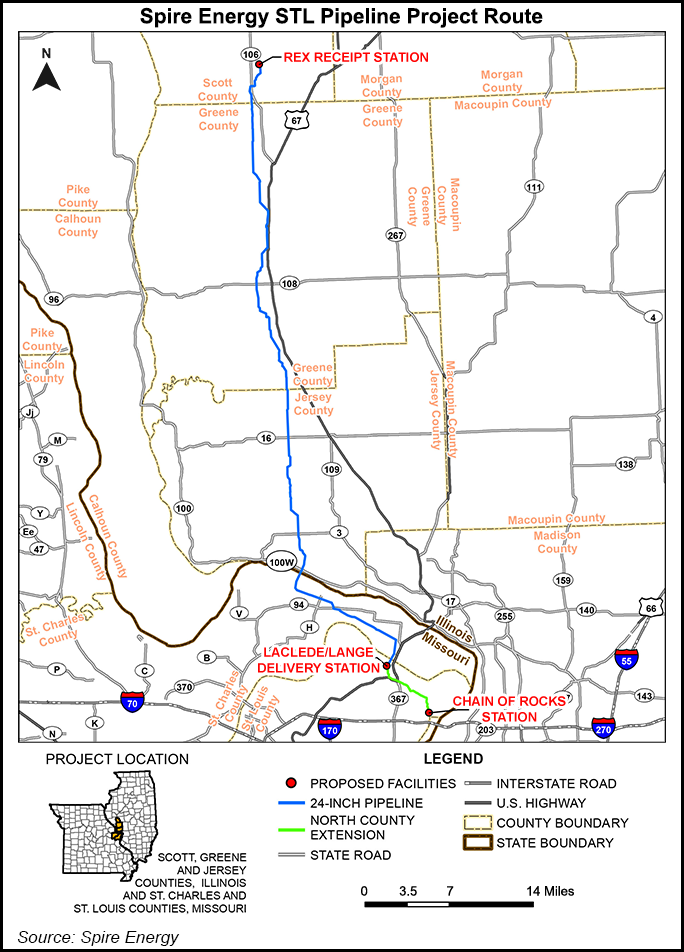 The St. Louis subsidiary of natural gas distribution company Spire Inc. first garnered approval for the pipeline in the summer of 2018, two years after launching an open season to gauge shipper interest. The STL pipeline was originally to start service on Nov. 1.

The Federal Energy Regulatory Commission in August 2018 issued a certificate for the project, which would extend from an interconnect with the Rockies Express Pipeline (REX) in Scott County, IL, to interconnections with subsidiary Spire Missouri Inc. and Enable Mississippi River Transmission LLC in St. Louis County.

The startup of the pipeline has the potential to boost REX’s overall utilization, said Tallgrass Energy LP’s Doug Walker, vice president of business development, who spoke to NGI on the sidelines of the conference. He said the REX-STL interconnect is accessible from both the east and west ends of the cross-country gas pipeline, which runs from northwestern Colorado and Wyoming to eastern Ohio.

Spire Missouri had signed a binding agreement in 2016 for 350,000 Dth/d under a 20-year term. The remaining 50,000 Dth/d of unsubscribed capacity could go for purchase on a spot basis, but the company is looking for other long-term contracts to utilize capacity, said Spire’s Justin Powers, director of natural gas supply. When service ramps up on the pipeline, Spire plans to execute on its strategy to become a pipeline and distribution company, Powers said at the LDC Gas Forums Midcontinent conference in Chicago.

Prior to the pipeline’s construction, Spire’s business segments were its gas utilities business, which has 1.7 million customers, Spire Marketing and Spire Storage. The STL line marks Spire’s first foray into the gas pipeline business.