As global natural gas prices have cratered and the market remains awash in supplies, speculation persists over the possibility for a spike in U.S. liquefied natural gas (LNG) imports this summer, a prospect that still remains unlikely. 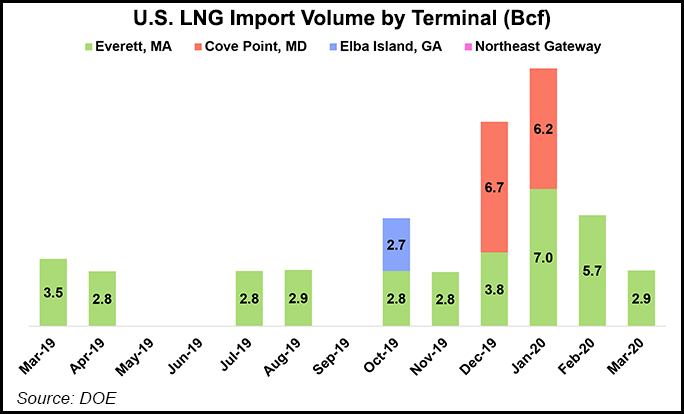 European natural gas storage is 76% full, well above the five-year average of 50%, and global prices have converged around $2.00/MMBtu. In the right arbitrage window, reloaded European cargoes could find their way to the United States or closer LNG producers, such as Trinidad & Tobago, could look to send cargoes there if Henry Hub prices strengthen and those overseas remain low.

For now, the economics don’t support a significant increase in imports, but anything is possible in a market turned upside down by the Covid-19 pandemic.

“If we saw just half of the Trinidad and Tobago cargoes that go overseas come to the U.S., we’re looking at 300-400 MMcf/d of gas and that’s what we see during the peaks of winter and we would definitely not expect that,” said energy analyst Connor McLean of BTU Analytics LLC. “We’re certainly not modeling that. But when prices do bottom out overseas and if Henry Hub can strengthen at the end of the summer, then I’m sure you could see a few cargoes.”

Last month, the Dutch Title Transfer Facility (TTF) and the UK’s National Balancing Point were trading around $1.00, while Henry Hub was around $1.70, enough to cover the costs of getting a cargo reloaded in Europe to the United States. But European prices have rebounded and are now trading more closely to Henry Hub on a prompt basis and well ahead of it on a forward basis.

But in the near-term, as global gas prices are poised to bounce off the same floor in the coming months, it could create opportunities for traders to capture value in unusual markets at this time of year.

“I had three reloads offered to me, and I would say that was on the back of me actively looking for volumes because I had free-on-board Atlantic demand, and I had heard that some of the economics started to work and some reload deals had been done,” said Melissa Lindsay, founder of the LNG broker platform Emsurge, of trading activity earlier this month.

Speculation ramped in May when the market began watching a number of LNG carriers that were thought to be headed toward the United States from Europe and beyond. So far, none of the vessels have unloaded a cargo in the United States. Last week, the Madrid Spirit berthed at Elba Island LNG, but the vessel didn’t appear to unload and left with the same draught it arrived with, according to ClipperData’s Kaleem Asghar, director of LNG analytics.

“The numbers don’t justify U.S. imports, why would somebody want to import a U.S. cargo on a TTF basis and pay additional costs for regasification and port charges,” he told NGI last week. “I don’t see it happening in terms of economics, but these are extraordinary times — anything can happen — these are not normal supply and demand conditions.”

“South America in particular requires smaller cargoes, or certain cargo sizes that don’t suit other load ports,” she said. “And obviously the drop in U.S. cargoes meant there was a lack of FOB volumes in particular and there was shipping available.”

To be sure, summer LNG imports in the world’s largest natural gas-producing country are rare. If additional cargoes are taken in over the coming months, depending on the terminal, the extra LNG is likely to end up in storage tanks and be re-exported. Most U.S. export terminals have import capacity and the ability to send gas back onto the country’s pipeline grid, as they were built to do just that, but regasification at the facilities has largely been underutilized.

The U.S. imported 52 Bcf of LNG last year, and the bulk of that arrived at Exelon Corp.’s Everett import terminal in Massachusetts during the winter months. That’s down considerably from the 91.5 Bcf of LNG that was imported in 2015, a year before Lower 48 exports started, according to the Energy Information Administration.

The possibility of those numbers increasing this year still remains slim. Henry Hub has been range-bound for months at about $1.60-$1.90.

“Henry Hub really isn’t budging right now in the forward market as we’re in injection season and given what demand has done in recent months,” Enverus’ Sarp Ozkan, senior director of energy analysis, told NGI. “It looks to be heading toward a very high close at the end of storage season in terms of capacity utilization, and we don’t expect a recovery in Henry Hub prices until the October timeframe, when we’re going to need a pretty strong price signal to be able to meet winter demand.”

While U.S. LNG exports have also fallen off sharply, associated gas production has crept back up, which could help keep more pressure on Henry Hub and even open the arbitrage window in a way that would find more U.S. exports moving overseas periodically in the coming months, Ozkan said.

Tudor, Pickering, Holt & Co. (TPH) said Monday that associated gas volumes have increased by 1.2 Bcf/d from a low-point earlier in the year, when U.S. producers started shutting in oil wells as prices nosedived. In all, TPH said U.S. gas flows are currently at 90.4 Bcf/d, up 2.4 Bcf/d from the low-point of 88 Bcf/d.

“All told, we expect to see volumes continue to trend higher over the coming weeks as more shut-ins return to market, putting added pressure on an already stressed gas market,” TPH said.