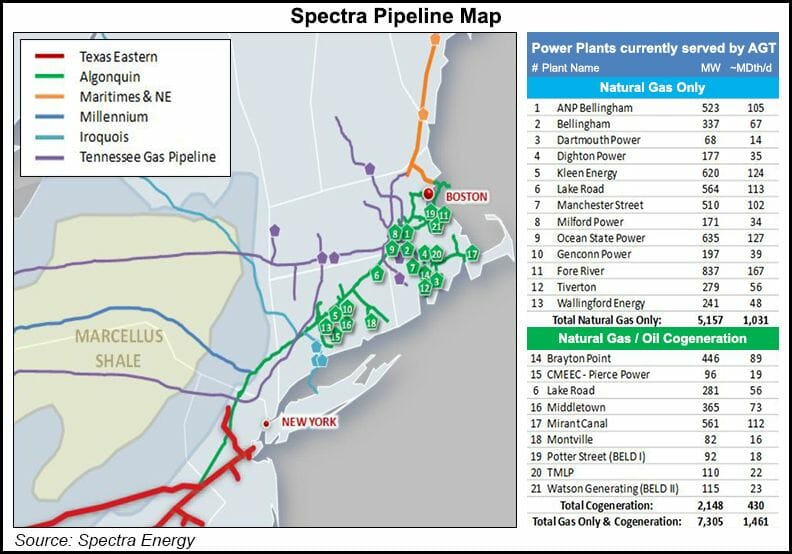 The new capacity would be in addition to that on the previously announced Algonquin Incremental Market (AIM) and Atlantic Bridge projects. The latest expansion plans come in response to a recent initiative by governors of New England states seeking new energy infrastructure. Spectra said it also is anticipating a request for proposals from The New England States Committee on Electricity (NESCOE).

“Spectra Energy stands ready with a unique solution to New England’s need for reliable electricity supply. Our pipelines are in the right place at the right time to supply the region’s electric plants with affordable, clean, domestic natural gas,” said Bill Yardley, president of Spectra Energy’s U. S. transmission and storage business. “To enhance the reliability of approximately 60% of these generators, we can expand our mainline and lateral facilities along our existing pipeline footprint while minimizing the effect on communities and the environment.”

The in-service date for the new capacity will be determined by the NESCOE process, Spectra said. The expansions will deliver gas directly to power generators on a firm basis. They will:

Upstream of Algonquin and Maritimes, new sources of gas supply have already been connected, the company said in the letter. “New, low-cost regional natural gas supplies have been flowing into Algonquin for more than five years,” it said. “…Solving reliability will automatically solve the spot price blowouts and decrease energy costs in the region.”

The proposed expansion of Algonquin would be in five regional zones that directly connect to 40% of New England’s power generation. Modifications to Maritimes would support service to 20% of the power generation fleet.

“The pipeline expansions will be identified in 200 MMcf/d increments by regional zones per power plant access,” Spectra said in the letter. “This regional solution will be scalable and strategic.”

As part of its analysis for the expansions, Spectra “identified the most desirable and efficient [power] plants up to 5,000 MW.” To serve that 5,000 MW resource’s demand for gas, Spectra would need to transport about 900,000 MMBtu on a peak day, it said.

Spectra Energy’s AIM expansion is expected begin to de-bottleneck the pipeline system by winter of 2016. AIM is underpinned by commitments from gas utility companies across southern New England. Atlantic Bridge’s proposed in-service is November 2017, and it will be similarly supported by gas utilities, Spectra said (see Shale Daily,June 20). “Electric power generators will typically only have access to gas from these projects when it becomes available on the unpredictable secondary market,” the company said. “The plans announced today will provide needed additional firm supplies, delivered directly to the power generators, to address the electric reliability issue.”

Last month, the backer of the Downeast liquefied natural gas terminal proposed for main announced that the previously import-only project would be refashioned as primarily an export terminal. It was said that such a project would create a demand pull in New England and incentivise the addition of new pipeline capacity into the region (see Daily GPI, June 20).