Spectra Energy Partners LP management is rethinking the Access Northeast project, with plans to add local distribution companies (LDC) to its customer mix after some New England states have effectively nixed contracts with electric distribution companies (EDC). The company also might pursue a legislative fix in at least one state. 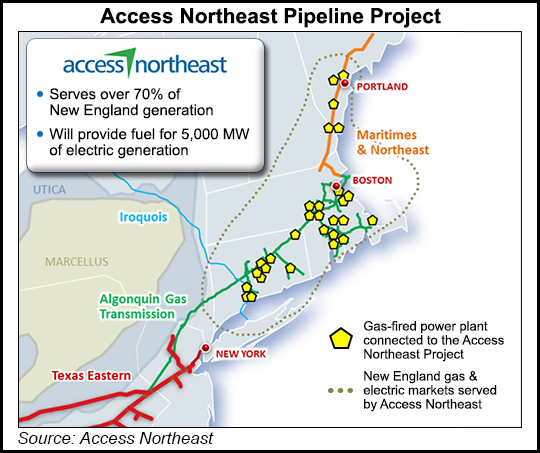 Massachusetts, New Hampshire and Connecticut have all prevented EDCs from contracting for natural gas pipeline capacity and passing costs on to ratepayers (see Daily GPI, Oct. 27). Spectra said Wednesday that it and its Access Northeast partners — Eversource Energy and National Grid — “…are extremely disappointed by some of the recent actions by certain New England states.”

Access Northeast, which would expand the Algonquin system, has been seeking EDC contracts to underwrite the project.

“We have shifted our focus a bit and said, ‘OK, so there are some electric distribution companies that will still stick with us and can legally stick with us, but at the same time there is a lot of unmet local distribution company load…’ This is a project that can be morphed into something that meets both electric and LDC needs,” Spectra’s Bill Yardley, president of the U.S. transmission business, said Wednesday.

The company is going back to the drawing board to add LDC contracts into the mix, Yardley said, adding that the additional time needed for that “probably makes this into a 2019 effort when we reformulate it.” Previously, Access Northeast in-service was planned for late 2018 (see Daily GPI, May 4).

“There’s one other avenue, probably a couple other avenues, but the other logical one is to do something legislatively,” Yardley said during an earnings conference call. “The Massachusetts legislature does reconvene early next year, and we may contemplate trying to throw something in there because overall…the governors in the region are supportive of [Access Northeast]; there have just been some adverse rulings that have set us back a bit.”

As the company brings LDCs into the Access Northeast fold, Yardley said care would be taken to ensure that the New England states involved will feel that they are sharing the cost of the project equally. “That’s important to the governors…It’s going to take a little time to work our way through that,” he said.

An announcement about contracting details for Access Northeast could come later this year or early next, he said.