With Asian investment for fuel, action has begun on schedule on the next planned step to increase British Columbia (BC) production of shale gas and liquids.

Spectra Energy Transmission (formerly Westcoast Energy) has made a construction application to the National Energy Board (NEB) for northeastern BC pipeline and processing facilities that cater to supply development by Progress Energy Resources Corp.

Titled the North Montney Project, Spectra’s program revives a mothballed site called the Aitken Creek Processing Plant and increases use of its larger McMahon Plant near Fort St. John, in the most accessible industrial region of remote northeastern BC. The project includes facilities for premium-value liquid byproducts, known as condensate or natural gasoline, as well as for dry gas.

Spectra named its project after a gas- and liquids-rich shale deposit that straddles the Alaska Highway where Progress and Petronas have declared intentions to pour more than C$1 billion into supply development over the next five years.

The Asian-Canadian corporate pair own the industry’s largest spread of drilling rights in the Montney formation of northeastern BC and northwestern Alberta: 825,000 acres (1,250 square miles), led by 700,000 acres (1,094 square miles) of the North Montney in BC. A geological evaluation last year estimated that a sub-formation of about one-fifth of the companies’ holdings contains 27.3 Tcf of gas in compact commercial packages averaging 126 Bcf per square mile.

In presentations to investors, Progress points out that Montney wells qualify for deep drilling credits against provincial production royalties of about $2 million each. Industry investment estimates indicate the incentive scheme covers about half the current costs for northern use of shale development methods, and predict expenses will be reduced as the technology evolves into a routine operation.

Employing horizontal drilling and hydraulic fracturing methods, the Petronas-Progress supply program supports a longer-range plan by the pair to build a mammoth LNG terminal on the BC Pacific Coast at Lelu Island, near the province’s northern-most seaport at Prince Rupert.

The design, called Pacific Northwest LNG, calls for construction in stages of an export tanker terminal with up to three output trains for 3.8 million tonnes apiece per year (about 180 Bcf annually, or 500 MMcf/d each) for C$9-11 billion. The plan also includes a new pipeline to fill the plant.

Petronas-Progress have scheduled terminal construction to begin in 2014, with LNG tanker exports from the Lelu Island terminal starting up in 2018.

Spectra’s NEB filing for new capacity kept a promise to advance the BC shale development juggernaut into the regulatory approval stage by the end of 2012.

In its construction application, the pipeline and processing company did not identify its customers for the expansion facilities by name or disclose the project costs on grounds that all tolls and fees have been set by negotiation of competitive rates. But Spectra presentations to investors have estimated costs of the North Montney Project at about C$200 million for capacity of 370 MMcf/d, and have identified Petronas-Progress as the main customer. The NEB application sets a target of May 2014 for completing and starting up the BC service additions. 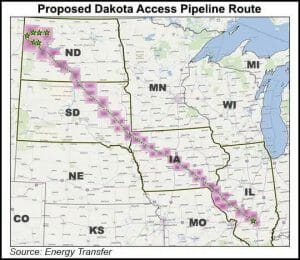 While opponents of Energy Transfer LP’s Dakota Access Pipeline (DAPL) have been seeking a shutdown of the line after a federal judge vacated a key permit last year, advocates of the controversial oil conduit are warning of major economic damage to stakeholders should operations cease. In a filing submitted Monday to the U.S. District Court…