Spectra Energy is in the preliminary stages of building a 427-mile, 36-inch diameter natural gas pipeline, with capacity of up to 1.1 Bcf/d, that would run from the heart of the Marcellus Shale to North Carolina. 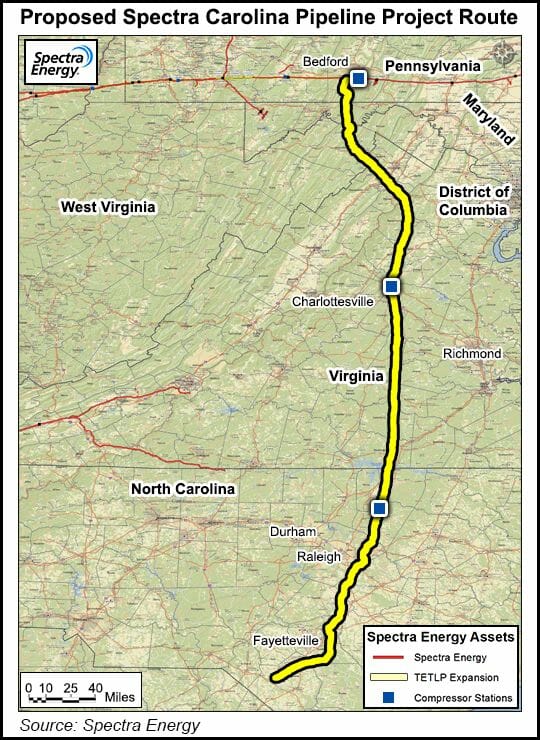 No final name has been set for the project, now dubbed Spectra Carolina, which is tentatively set for service in late 2018, spokesman Arthur Diestel told NGI’s Shale Daily. The greenfield project isn’t related to any of Spectra’s other expansions, he said.

The proposed pipe would begin at subsidiary Texas Eastern Transmission LLC compressor station 220 in Bedford County, PA. Based on a natural gas pipeline study of the corridors, the pipe would extend into Maryland, Virginia and West Virginia before terminating in North Carolina.

The Spectra pipe also would include an expansion of the Texas Eastern system in Pennsylvania and West Virginia, Diestel said.

“Everything still could change,” he said. It may take up to 18 months before the project is finalized. The final route isn’t set in stone.

Diestel confirmed that the greenfield pipe is in response to a request for proposals issued in late March by Duke and Piedmont Natural Gas for a gas pipeline able to carry up to 900 MMcf/d to the growing region (see Daily GPI, April 1).

The Spectra pipe into North Carolina would provide firm gas transportation in the South Atlantic region for generation and local distribution companies, Diestel said. The Houston operator already has about 2 Bcf/d of expansion project underway to carry Marcellus supply to southern/southeastern markets (see Daily GPI, May 7).

Information already is being sent to affected stakeholders in Bedford County, PA that may be impacted by the proposed pipe, Diestel said. Stakeholders were assured they would have opportunities to interact with the project team and participate in the regulatory process.