Spectra Energy Corp. has completed an open season for a proposed expansion of its Philadelphia Lateral, a pair of pipelines in southeast Pennsylvania that could bring more supplies of Marcellus Shale natural gas to the Philadelphia region. 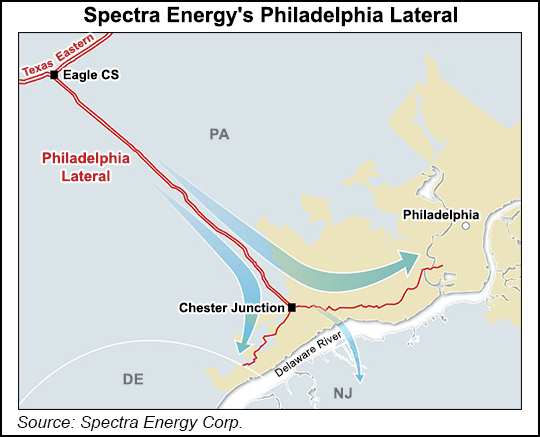 The proposed project — officially, the Greater Philadelphia Expansion Project — calls for expanding Spectra’s existing Philadelphia Lateral, currently two 20-inch diameter pipelines that originate on the discharge side of the Eagle Compressor Station along Spectra’s Texas Eastern Transmission interstate pipeline and extend to the Chester Junction Station. From there, the two 16-inch diameter pipelines extend into opposite directions: to the southwest terminating near the Delaware-Pennsylvania border, and to the northeast terminating near the City of Philadelphia.

The Philadelphia Lateral currently has 500,000 Dth/d of capacity. The proposed expansion is scalable and could add an additional 450,000 Dth/d, depending on the nominations received during open season for the project, which began on March 25 and ended last Friday.

“Right now, we’re contemplating that we will have a combination of pickup and relay of larger diameter pipe, and also looping [pipeline] within the same corridor. It could be necessary for a small amount of greenfield construction, but ultimately we would leverage our existing footprint.

The project would require FERC approval, but Hotzel said the timeline for submitting any permit requests to the Federal Energy Regulatory Commission depended on the results of the open season. But he said that if the project ultimately moves forward, the company is hoping to have it in service by November 2018.