Global natural gas prices continued a relentless move higher on Friday, as spot prices in Spain shattered records and all-time highs in the northern Asia market showed no signs of slowing amid a cold snap and supply crunch supporting the bullish run. 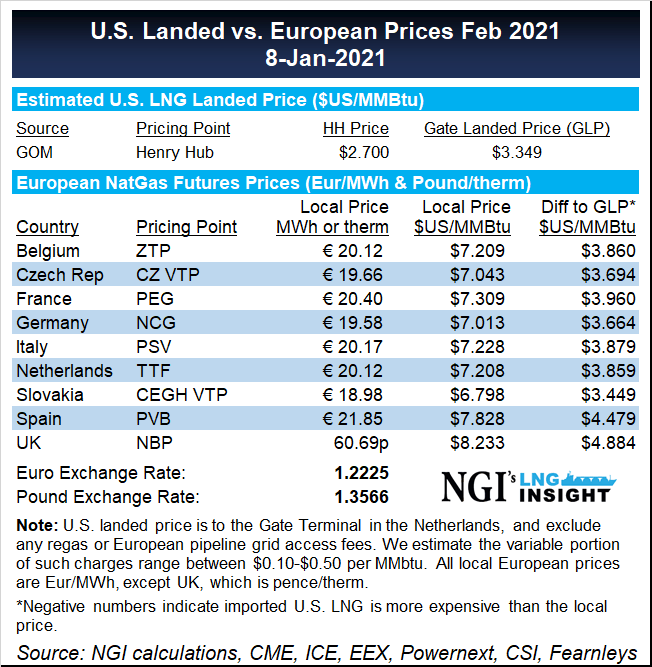 In Spain, a major gas-consuming country that hosts more liquefied natural gas (LNG) import terminals than anywhere else in Europe,  Punto Virtual de Balance (PVB) spot prices hit an all-time record of $18.71/MMBtu this week. The Spanish benchmark is trading near the Japan Korea Marker (JKM) spot price, which has shot through the roof over the last week as below normal temperatures in China, Japan and South Korea left buyers in need of prompt cargoes.

“Gas is becoming increasingly profitable right now due to the high carbon price, but due to high LNG prices in Asia, supply to Europe has been halted as producers are sending their gas to Asia instead,” said trading firm Energi Danmark on Friday of the European market.

Heading into winter, European and Ukranian storage inventories were near record highs and the continent was not competing for cargoes with Asia, where on Friday the JKM spot price hit $21.453/MMBtu, or the highest since it was established in 2009. Only nine months ago, Asian spot prices were at levels below $3.00. The February JKM futures contract, which expires next week (February 15), has shot above $17.00 as a result of the spot market action. JKM prompt futures stood at about $11.00 early last week.

The price premium is pulling cargoes away from Europe, where below normal temperatures are cutting into storage inventories and helping to lift prices as well. Spain posted its lowest temperature on record this week, when thermometers dipped to minus 29 degrees F in the Pyrenees and snow, a rare occurrence, fell over Madrid. Algerian natural gas supply outages have also tightened the market in Southern Europe.

“It’s there we kind of see this competition with Asia reemerging,” Energy Aspects analyst James Waddell told NGI. “The Spanish PVB market is now basically outbidding the JKM for late 1Q2021 supply because it’s not yet clear when the Algerian supply is going to come back, but we’re seeing a major sequential drop there, and without being able to get anymore gas from Northwest Europe, the PVB is really having to compete with Northeast Asia for LNG cargoes.”

The February PVB futures contract is also among one of the strongest performers in Europe right now, finishing at $7.517/MMBtu on Thursday, or a differential of $4.139 to U.S. landed LNG prices, according to NGI data. The February National Balancing Point contract was also near $8 and the February Dutch Title Transfer Facility contract was near $7 as the week came to a close. Temperatures are also below normal in the UK and Northwest Europe.

“The data is still preliminary but Wednesday’s 43 Bcf draw would reflect the largest single-day draw from European storage in our data set, lifting cumulative draws for the past seven days to 179 Bcf and dwindling the surplus to the five-year average to just 5%,” said analysts at Tudor, Pickering, Holt & Co. on Friday.

The shipping market also remains extraordinarily tight, with buyers in Asia increasingly turning to the Atlantic Basin for supplies as outages persist at facilities across the world. That has benefited U.S. LNG export terminals, which continue to run at or near capacity. The shipping market has been stressed with vessels having to travel longer distances from the Gulf Coast and other parts of the Atlantic Basin to reach North Asia. The trend is exacerbated by ongoing bottlenecks at the Panama Canal. The situation has left few vessels available to charter on short notice.

Bloomberg reported Friday that Trafigura Group Pte Ltd. is looking to charter an LNG tanker to load an early February cargo from the United States at a rate of $350,000/day. Meanwhile, data intelligence firm Kpler, citing Spark Commodities data, said freight rates have been assessed at $322,000/day in the Atlantic Basin.

Shipbroker Fearnleys AS said in a note Wednesday it expects the market to remain tight through March.