Standard & Poor’s Ratings Services (S&P) on Thursday lowered its Henry Hub natural gas price assumption to $2.75/MMBtu in 2015, down 75 cents from a forecast in January. 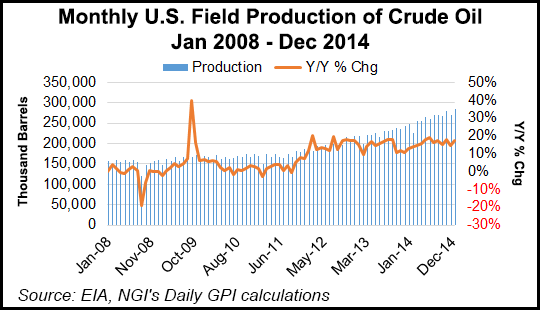 In January, S&P’s price deck for U.S. gas prices at the New York Mercantile Exchange were set to average $3.50/Mcf in 2015 and $3.75 in 2016 (see Shale Daily,Jan. 22). Watters and his team said at that time that liquidity would be less of a struggle this year than expected because of three things: many low-rated companies had hedged production substantially this year; many issuers had refinanced revolving credit facility borrowings by issuing debt before prices turned; and capital expenditures were being slashed to preserve 2015 liquidity.

Henry Hub gas price assumptions were lowered because of U.S. Energy Information Administration data, Watters said. Gas storage inventory levels “are about 53% above levels of a year ago despite frigid winter weather conditions in the Northeast. Dry natural gas production for the Lower 48 states reached record levels this winter and has thus far averaged 72 Bcf/d in March. Shale plays account for more than 50% of the total production with the strongest growth rates coming from the Appalachian Basin, namely the Marcellus and Utica plays.”

“The change in the oil long-term price deck reflects a shifting in the future curve and our projection that marginal production costs will be lower,” Watters said. Even though exploration and production companies have cut capital spending “in the 30% to 40% range…a decline in oil production has yet to materialize. New wells drilled in the fourth quarter of 2014 continue to come online and producers have shifted assets to their most productive and profitable wells. With production continuing to grow, storage capacity issues are beginning to plague the market.”

S&P analysts plan to review exploration and production issuers under the new pricing assumptions in the next few weeks. The review also plans to take into account company-specific factors, including other rating assumptions and issuers’ flexibility to adapt to lower prices, hedge positions and liquidity.

Natural gas and oil recovery price deck assumptions were not changed. S&P also has not changed its fundamental view of the industry over the next one to two years.

“However, the decline in price assumptions in 2017 represents the prospects of a more muted recovery. Standard & Poor’s expects that OPEC, particularly Saudi Arabia, will remain committed to maintaining production quotas to preserve market share and are unlikely to deviate from this position until a significant ebbing in production from U.S. shale players has been achieved and new supply-demand equilibrium.”

U.S unconventional drillers “have the ability to rapidly increase production if higher prices return and thus a more gradual and prolonged recovery will clear the market of marginal producers and restore an equilibrium in the supply and demand balance.”