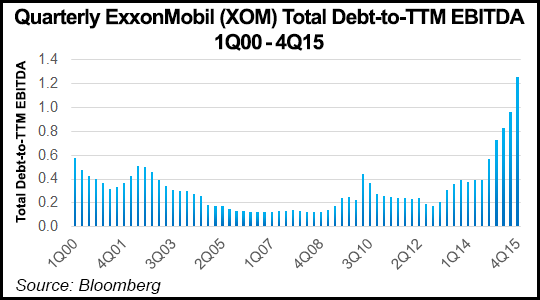 The world’s largest public oil company, which had been triple-A rated since 1949, was one of the few U.S. companies, including Microsoft Corp., to hold the gold investment grade. S&P sliced it to “AA-plus.”

“We forecast that ExxonMobil’s credit measures, including free operating cash flow to debt and discretionary cash flow to debt will remain below our expectations for the ‘AAA’ rating through 2018,” analysts Ben Tsocanos and Christine Besset wrote. The outlook remains “stable.”

An ExxonMobil spokesman said the downgrade would change “nothing” for the company in terms of “financial philosophy or prudent management.”

CEO Rex Tillerson during the annual analyst conference in March had touted the company’s sterling investment rating and said it had the flexibility to pursue “attractive opportunities” or adjust its spending based on market demand (see Daily GPI, March 2). However, capital spending is 25% lower this year than in 2015 at $23.3 billion. First quarter results are scheduled to be issued on Friday.

“ExxonMobil has reduced capital spending sharply and will likely benefit from near-term production gains as major projects reach completion,” S&P analysts said. “Despite the favorable effect of lower service costs and improved efficiencies, we believe that maintaining production and replacing reserves will eventually require higher spending. As a result, we expect leverage to remain weaker than levels consistent with a ‘AAA’ rating, and we believe that lowering ratings to ‘AA+’ is appropriate.”

The S&P analysts said ExxonMobil may return cash to shareholders rather than building cash or reducing debt, “limiting improvement in our projected credit measures when commodity prices improve.”

The “stable” outlook reflects an expectation that the producer “will continue to follow moderate financial policies of low leverage and responsible capital stewardship…Based on ExxonMobil’s role as a very large, well-capitalized industry leader, we expect the company to continue to undertake large-scale, long-lead-time projects in politically challenging environments and to periodically make large acquisitions.”

Its long history of making big investments in a fiscally prudent manner is a positive rating factor, analysts said. The ratings could be cut even more “if the company were not able to adjust costs and spending adequately during a period of sustained low commodity prices, if the company pursued a large leveraging acquisition without a plan to improve credit measures, or if the company returned cash to shareholders beyond internally generated cash flow on a sustained basis.”

The ratings could be raised if management demonstrates a “commitment” to financial policies consistent with “expectations for a minimal financial risk,” which would include using discretionary cash flow to reduce debt significantly when prices recover from current levels and commit to maintaining “very conservative credit measures.” 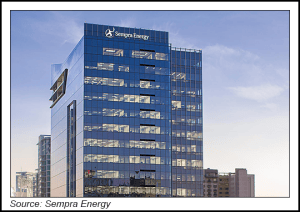