Liquids-rich and oil plays have clearly won the hearts and dollars of North American producers. The Eagle Ford and Bakken shales are stars now, but several others are poised to join or possibly eclipse them, according to a recent note by Standard & Poor’s Ratings Services (S&P). 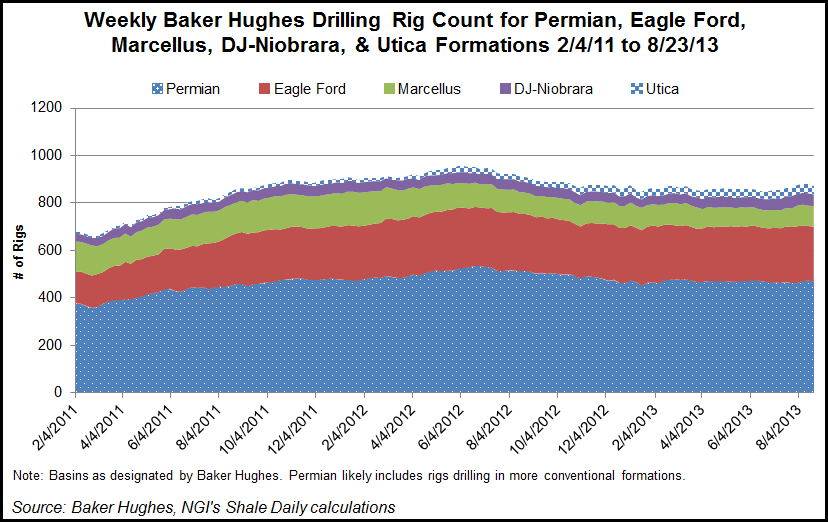 Independent U.S. exploration and production (E&P) companies that the ratings agency follows are expected to spend about $80 billion to develop onshore resources this year. About $17 billion of that is slated for the Eagle Ford, S&P said. Total Eagle Ford spending overall (including majors, non-U.S. companies and those not rated by S&P) is expected by S&P to be about $30 billion. Only about $1.4 billion is expected to flow to the Haynesville Shale from rated independent producers, S&P said.

“We estimate the U.S. independent E&P companies will spend $7.5 billion in the Marcellus shale in Appalachia (primarily Pennsylvania, West Virginia and Ohio) this year, but most of that will target higher liquids content production rather than dry gas.”

As for the other contenders, it may be years before it is known whether any of these is the next Eagle Ford, S&P said. The Utica Shale, Niobrara Formation and Mississippian Lime all hold promise, as do the Spraberry and Wolfcamp formations in the Permian Basin, S&P said.

The ratings agency said Utica wells typically cost $8-9 million to drill and complete and offer the potential for “sizable” recoveries. “The recent Ohio Department of Natural Resources report on 2012 production from the play noted a higher component of gas production, which tempered enthusiasm somewhat [see Shale Daily, April 3, 2012],” S&P said, adding that the picture will be clearer on the Utica once more wells are drilled.

In the Niobrara, the number of rigs drilling horizontal wells is still comparatively low, but it now exceeds the horizontal well count in the Utica, S&P said. “We estimate that rated independent E&P companies will spend about $4 billion in 2013, with Noble Energy Inc. and Anadarko Petroleum Corp. investing the majority of this amount.”

The Niobrara offers lower average recoveries than the Eagle Ford or Bakken, and oil content is lower, but well costs are lower as well, at about $5 million or less, S&P said. The play is “promising,” it said.

In the Mississippian Lime, “companies have reported wide differences in initial production rates and estimated ultimate recoveries from well to well, and wells produce significant amounts of salt water, which has to be disposed of economically,” S&P said. “Over the past year, operators have moved horizontal rigs into the area; about 75 rigs are targeting the Mississippian Lime, exceeding the amount in the more prospective plays (such as the Utica) but well below the number of horizontal rigs operating in the marquee liquids areas.”

Finally, shale E&P techniques are unlocking new resources from the Permian, particularly from the Wolfberry, a combination of the Spraberry and Wolfcamp formations; and the Bone Spring formation.

“Advocates of the Wolfberry claim it will prove to be the largest oil resource in the U.S. and one of the largest worldwide, with up to 50 billion boe of recoverable reserves,” S&P said.