Southwestern Energy Co. set a new record for production in 2014 of 768 Bcfe, 17% higher than in 2013, lifted by its growing momentum in the expanded Appalachian Basin enterprise. 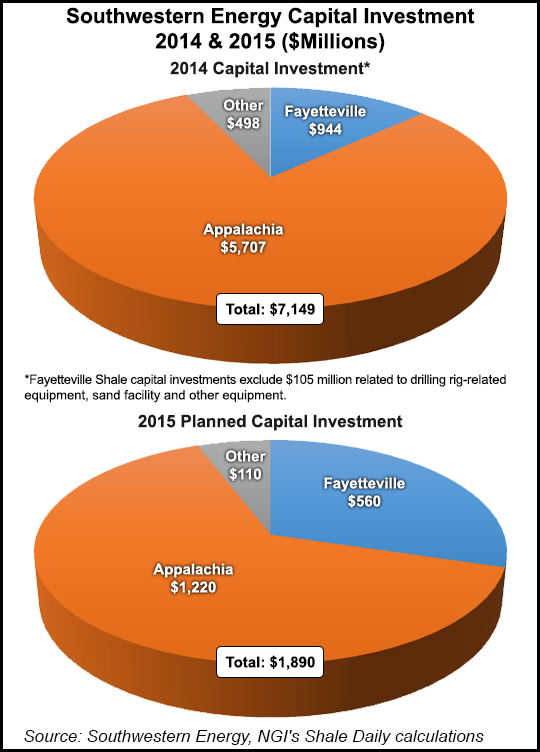 Gross operated production in Northeast Pennsylvania surpassed 1 Bcf/d at the end of 2014, versus a 2013 exit rate of 700 MMcf/d. Total proved reserves jumped 63% to almost 3.2 Tcf, with average reserves growth per well increasing to 9.8 Bcf from 8.4 Bcf.

What Southwestern achieved — and continues to achieve — in its legacy Fayetteville Shale portfolio it is doing again in the Northeast, despite low prices, said CEO Steve Mueller.

“Southwestern Energy is not immune to commodity price volatility, and we’ve adjusted our 2015 guidance but our talk is not changed,” Mueller told analysts during a fourth quarter conference call last week. “Our record results in 2014 again provide conclusive evidence that we can excel in a volatile environment like today.

“We do talk about cost, and we’ll certainly benefit from any short-term decreases by the service industry. But we continue to look for long-term cost reductions and better well results that deliver economic benefit today and for many years from now when we drill those last wells on our assets.”

The foundation shale plays, the Fayetteville in Arkansas, Pennsylvania’s Marcellus Shale and the newest acquisition in Appalachian shale in West Virginia and southwestern Pennsylvania “are uniquely positioned to supply that new and growing demand from the Gulf Coast of Florida and any other location in the Eastern half of the United States.” Houston-based Southwestern managed to “create those wins in low price environments,” Mueller said.

“We will do what we’ve always done in the pricing environment. That is, simply drill economic wells and meet our economic hurdle, delivering $1.30 discount at 10% for every $1.00 invested. We know that if we consistently do that every day we will deliver the results, and we’ll set more near-term records and create sustainable long term returns for our shareholders.”

It is not full-speed ahead, however, COO Bill Way told analysts. After completing its $5 billion purchase of southwestern Appalachian Basin land from Chesapeake late last year, the plan was to step on the Marcellus Shale gas pedal (see Shale Daily, Oct. 16, 2014). The company had said it would spend $2.6 billion for total capital expenditures this year, but the marketplace has forced the budget lower by $600 million.

“Even with this reduced capital program we are targeting substantial production growth of 23% for the year,” Way said. Last year Southwestern set a new record for production of 768 Bcfe, which is 17% higher than in 2013.

“We’ve demonstrated in the past that we can deliver industry-leading returns in these low-price environments, and that is exactly what we will do in the year ahead,” Way said. He noted that Northeast Appalachia production in 2014 “grew to 254 MMcf, which was a 69% increase over 2013 volumes. We ended the year with gross operating production of over 1 Bcf/d compared to approximately 700 MMcf/d at the end of 2013.”

The big focus for now is in Appalachia, where engineers are working to drive down costs.

“In 2014, our average completed well cost for our operated wells was $6.1 million, which is down from the $7 million average in 2013,” Way said. “We’ve made the additional progress in our testing of steering targets and profit loading and we’ve completed 18 wells with over 2,500 pounds of sand. These wells got an initial productivity increase of 50% versus prior wells. Our early test indicate that we can achieve productivity gains by pumping more profit per stage over 1 million pounds and optimizing stage spacing to approximately 500 feet on average, which allows us to place more profit and reduce cost.”

In addition to lower Marcellus success, the company began testing the upper part of the play early this year, placing four wells on production with initial rates averaging more than 6 MMcf/d per well.

Delineation efforts are under way in other parts of the Northeast Appalachia acreage. One well was drilled in Wyoming County, PA, on a 5,600-foot lateral. The well flow tested at 7.5 MMcf/d with a flowing tubing pressure of 1,000 parts/square inch. Another well in Tioga County, PA, produced as high as 8.2 MMcf/d from the completed portion of the lateral.

“Our plans are to continue delineating our Tioga acreage during 2015 while the gathering system is constructed,” Way told analysts. “Obtaining firm transportation capacity at economic rates is essential to the differentiating success we have been able to realize in Northeast Eastern Pennsylvania.”

Last year, Southwestern was able to expand its firm transportation capacity to 1.4 Bcf/d, giving it pipeline space needed to push growth over the next few years. By 2020, Southwestern expects to be producing as much as 2.5 Bcf/d from the newly added Chesapeake assets alone. Since the end of December, Southwestern has picked up about 175 MMcf/d of unused capacity in the Marcellus on a three-year term, Way said.

“Our guys are out opportunistically picking these up and we feel very comfortable we can continue to do that,” he said. Southwestern is securing gas volumes that were “committed by other companies, so it’s available today,” Mueller said. Those original capacity contracts provided prices that were “low, so you’re talking about 30-cent type numbers, 30-40 cent numbers versus 50-60 cents.”

Between now and the end of 2016, “what we will do is work with other operators that have excess capacity and use their capacity. On a percentage basis, selling into a daily market isn’t going to be that high a percentage. We think there is plenty of excess capacity we can work off between now and ’16. You will see us in the near future commit to probably close to 1 Bcf/d. That would be the ’17, ’18, ’19 time frames.”

For this year, Southwestern is expecting a record year in Northeast Pennsylvania. On a three-rig program, plans are to drill a total of 90 wells in 2015,” Way said. Twelve wells are planned in Bradford County, 69 in Susquehanna and four wells are scheduled in Lycoming County. Five more wells total also are to be drilled in Wyoming, Sullivan and Tioga counties. Gross operated production is expected to hit more than 1.3 Bcf/d in the play, “which will set us up nicely for a strong 2016 and beyond as well.”

In the new play area of West Virginia and southwest Pennsylvania, drilling operations have been completed on the first well, Roberts Shorts 5H, which included a 8,150-foot lateral that was drilled in less than three days.

Meanwhile, the legacy Fayetteville delivered the strongest production year in its 10-year history. Southwestern placed 454 operated horizontal wells on production and produced 494 Bcf net. Fayetteville also provided a boost to the Northeast activities with more than $300 million of free cash flow, Way said. “The average initial production rates for the 454 wells we put online in 2014 was roughly 4.4 MMcf/d, compared to average initial production rates of 4 MMcf/d in 2013.”

Another feat: 24 of the top 30 wells drilled to date in the Fayetteville were drilled in 2014.

“With the decade of development behind us, we continue to leverage our learning and find new ways to deliver even better results for the next decade of development,” said the CEO. Notably, initial production rates for three wells in the play averaged 5.9 MMcf/d last year.

However, the Northeast is the bigger money maker for now, and Southwestern has trimmed the Fayetteville budget by almost $400 million from 2014 plans.