Southwestern Energy Co. is going all-in on the Appalachian Basin, announcing on Tuesday that it would exit the play it gave rise to with the $1.9 billion sale of the Fayetteville Shale assets and move some of the proceeds into the liquids-rich Northeast, which has consistently outperformed declining production in Arkansas. 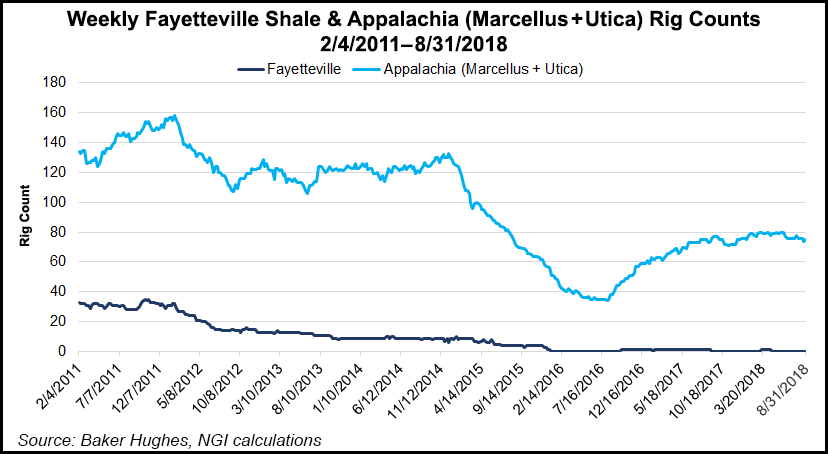 Southwestern, which has been marketing the Fayetteville properties since the beginning of the year to reposition its portfolio as part of a broader cost-cutting initiative, said it would sell its Fayetteville assets to privately held Flywheel Energy LLC, a company backed by Kayne Private Energy Income Funds. The deal is expected to close in December.

The sale marks the end of an era, as the Fayetteville built Southwestern’s brand as an unconventional explorer. The Houston-based independent lays claim to the first successful natural gas production from the formation, becoming one of its most dominant players over the years. It spent $11 million for 343,000 acres in 2003 at a time when benchmark natural gas prices traded above $5.00/MMBtu for most of the year and continued increasing to hit a peak of nearly $13.00/MMBtu in 2012.

“The sale of the Fayetteville represents a pivotal and deliberate step towards fulfilling our promise to reposition Southwestern Energy to capture greater returns from our higher margin Appalachia assets,” said CEO Bill Way. The transaction is “a significant milestone in advancing our strategic plan.” He said shareholders would benefit from an “optimized portfolio, stronger balance sheet, including improved financial flexibility, and the return of capital to all shareholders through a share repurchase program.”

The company would receive $1.865 billion in cash, while the buyer would assume $438 million of future contractual liabilities. The proceeds would go toward retiring debt, as Southwestern also announced Tuesday that it would buy up to $900 million of its senior notes and expects to have pro-forma debt of $2.3 billion after closing. The company has also authorized a $200 million share repurchase program.

Moreover, Southwestern said it expects annualized interest and organizational cost reductions of $60-75 million from the sale.

To replace the cash flow that would have been generated by the Fayetteville assets, the company plans to allocate $600 million from the sale to its liquids-rich Appalachian assets in West Virginia over the next two years. The company plans to keep running up to six rigs next year in the Northeast, where it is guiding for 8-12% year/year production growth and liquids growth of 15-25%. In 2020, management said the company anticipates production growth in the mid-teens and liquids growth in the mid-twenties.

To be sure, higher oil prices have emboldened Southwestern and other Appalachian operators to target more liquids in the region, where it holds more than 475,000 net acres. Southwestern produced 234 Bcfe during the second quarter, including 61,370 b/d of natural gas liquids (NGL) and condensate, or a 44% year/year increase in liquids volumes driven by Appalachian volumes. Overall, production was up from 222 Bcfe in the year-ago period and 226 Bcfe in 1Q2018. During the same period, the company saw a 34% and 46% increase in NGL and oil prices.

Earlier this year, Way said Appalachia had set a high bar for the Fayetteville, and the company began exploring strategic alternatives for the assets. To push the properties’ value up, Southwestern has been proving the Moorefield Shale, which sits below the Fayetteville, and has redeveloped legacy areas with the latest generation of drilling and completion techniques.

But while the company’s Appalachian production has skyrocketed in recent years, the Fayetteville has only declined. Production there last year dropped to 316 Bcf from 375 Bcf in 2016. Production from the play dropped again in the second quarter to 67 Bcf from 82 Bcf in the year-ago period. It was flat from 1Q2018.

NGI’s Patrick Rau, director of strategy and research, noted that production has dipped across the play, as several midstream companies have written down their asset value there or recontracted capacity at substantially lower rates. Indeed, Southwestern reached an agreement with Boardwalk Pipeline Partners LP in late 2017 to restructure firm transportation agreements in the play to reduce excess capacity. But Rau added that the deal is principally related to higher returns in the Northeast and the Fayetteville’s effect on the company’s balance sheet.

“There’s been a general trend for publicly traded companies selling to private equity, primarily those public companies that have a multi-asset portfolio,” Rau said. “By selling properties with lesser returns, the publicly traded exploration and production companies can focus on their higher return assets, and it can improve their returns on invested capital, which is the new mantra among those public producers.

“These firms are more capital conscience these days. Wall Street is shunning new equity raises, and loading up on debt to outspend cash flows is frowned upon as well,” he added. “That means publicly traded companies are relatively more capital constrained, so they will really wish to focus on their very best properties for the foreseeable future.”

Rau said private equity and investment firms like Kayne “can take their time on growing their assets.” Kayne Anderson Capital Advisors LP in 2016 formed the energy income fund that’s backing Flywheel to partner with companies and acquire mature, long-life oil and gas assets throughout North America. For Flywheel, Rau noted that the Fayetteville is downstream of Appalachia closer to demand, which provides a cost advantage.

“The Fayetteville could look a lot better in a few years, when liquified natural gas exports really take off in earnest, and particularly if the second wave of final investment decision projects comes forth,” he said. “Southwestern was reporting some interesting wells in the underlying Moorefield Shale, so perhaps there is a bit of a call option on that as well.

“The Fayetteville may very well be better suited for another time, and private equity companies have more of a luxury to wait until then, everything else being equal.”

Flywheel CEO Justin Cope called the Fayetteville a “historic” play, noting that it’s had a “prominent role in the American shale revolution.” He added that the Oklahoma City-based company’s decision to buy Southwestern’s assets was another step to “execute our long-term strategy and achieve superior risk-adjusted returns for our investors.”

The company said the acquisition follows the closing of a $700 million equity commitment from Kayne, which first partnered with the Flywheel management team in 2017, when the firm invested $300 million in predecessor Valorem Energy LLC.

Flywheel was formed to acquire and operate large, producing onshore U.S. assets with a focus on the Rockies and Midcontinent. Including the latest deal, the company has made more than $2.1 billion of acquisitions since last year.