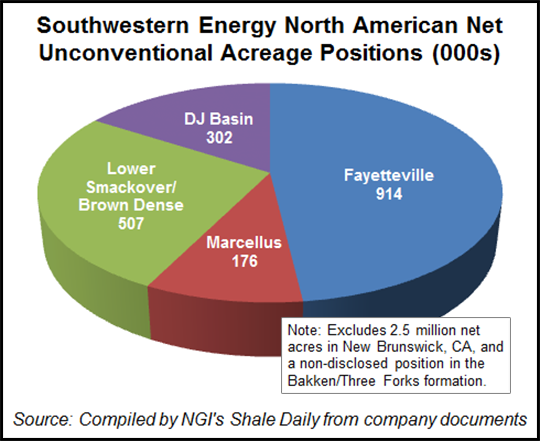 In the Marcellus Shale, fourth quarter production was 19.3 Bcf, up from 8.1 Bcf during the year-ago quarter. Costs keep declining in the Fayetteville Shale. And in the emerging Lower Smackover Brown Dense, the company continues to find its way as it nears securing a joint venture (JV) partner.

“We grew production by 13%, set records both for highest average initial producing rates and lowest well costs in the Fayetteville Shale and ramped our Marcellus production dramatically,” Mueller said. “During 2012, we also posted the second highest cash flow in the company’s history, along with record gathered gas volumes that translated to record cash flows in our midstream business.”

“I am especially excited about the way we eliminated some of our operating costs,” Mueller said. “We didn’t just reduce costs. A team made up of several disciplines found ways to eliminate the need for two of our three salt water disposal facilities in the Fayetteville Shale. Working with agencies in Arkansas, our staff developed new methods to creatively and effectively reuse the water, leading to less road use, less water to dispose of and significant long term cost savings.”

Last fall, Southwestern was among a handful of companies in the Fayetteville named in a lawsuit by landowners over wastewater injection wells (see Shale Daily, Oct. 9, 2012).

During an earnings conference call on Thursday, analysts that follow the company were particularly interested in the Lower Smackover Brown Dense formation in southern Arkansas and northern Louisiana. “We reached a new milestone in the Brown Dense,” Mueller said. “…We’re beginning to see a glimpse of how the Brown Dense might be successful, and we are in the final stages of signing up a partner to help us reach commerciality.”

Bill Way said a tentative agreement for a Brown Dense JV reached in February includes cash up front and three-year term carry on accelerated investment activity. He said more details would be available after the agreement is finalized.

“Our plan includes a more active drilling program in the Brown Dense in 2013,” Way said. “To date in the Brown Dense, we have drilled and completed six wells. And each successive well has showed an increase in initial flow rate.”

The company recently spudded its seventh Brown Dense well. “We plan to drill and complete a 3,000-foot horizontal lateral with initial results expected from this well in the second quarter,” Way said. “We’re learning more about the play with each successive well, and we are focused on various methods to optimize our fracture stimulation, with the focus on increasing reservoir contact area…We continue to believe the size of the prize is significant.”