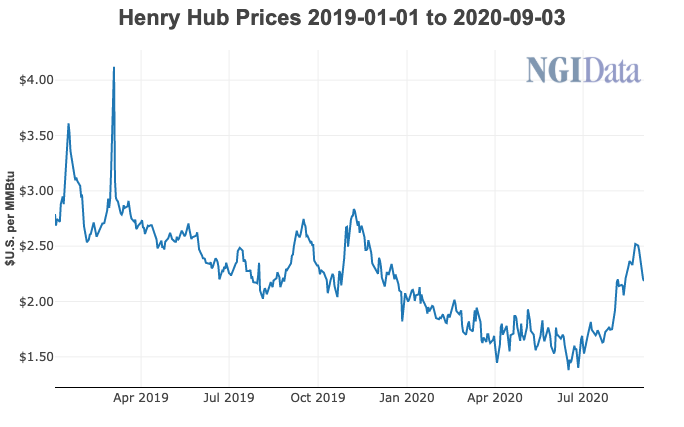 Fifty-one production platforms, or close to 8%, remained unmanned. One rig also was unmanned of the 12 in operation ahead of the storm.

Power outages continue to torment a large swath of Louisiana, and the short-term outlook for restoration in the Pelican State still is grim, the Department of Energy (DOE) said Thursday.

The DOE estimated 212,000 customers were without power, with 202,000 alone in Louisiana. Another 9,000 were powerless in Texas following Laura’s wrath.

“Restoration efforts are underway across the affected region and damage assessments are nearly complete,” the DOE said. “Some of the hardest hit areas continue to have limited access due to storm debris. Full restorations for the most significantly damaged areas in western Louisiana could be extended, with full restoration for some portions of southwest Louisiana taking up to several weeks.”

More than 29,000 personnel from at least 29 states, the District of Columbia and Canada were supporting Gulf Coast restoration efforts. Laura also caused “significant damage to transmission infrastructure in portions of Louisiana and Texas,” DOE noted. Restoring the systems “is a priority to help enable other phases of restoration.”

For the most significantly damaged areas in western Louisiana and along the Louisiana-Texas border, full power restoration is expected to take more than another week, “with the potential for a multi-week restoration efforts for the hardest-hit areas where the distribution systems need to be rebuilt and/or due to significant transmission impacts.”

A substantial number of customers also may not see power for some time because of “damage to customer equipment and or damage to the customer’s structure,” the DOE said.

Meanwhile, refineries in the petrochemical hub east of Houston, the Beaumont/Port Arthur area, have begun restarting operations, but those too “which could take more than a week,” according to the DOE.

Refineries in the devastating area of Lake Charles, LA, however, “will likely remain shut down for several weeks.”

Many retail fuel stations are unavailable in the impacted area because of power outages and/or damage.

“Louisiana and industry have deployed generators to some stations without power, as well as distribution points,” the DOE said. As of Wednesday, the industry reported no gasoline or diesel shortages. However, because of the “limited number of stations in some impacted areas, lines have been reported at stations that are operational.”