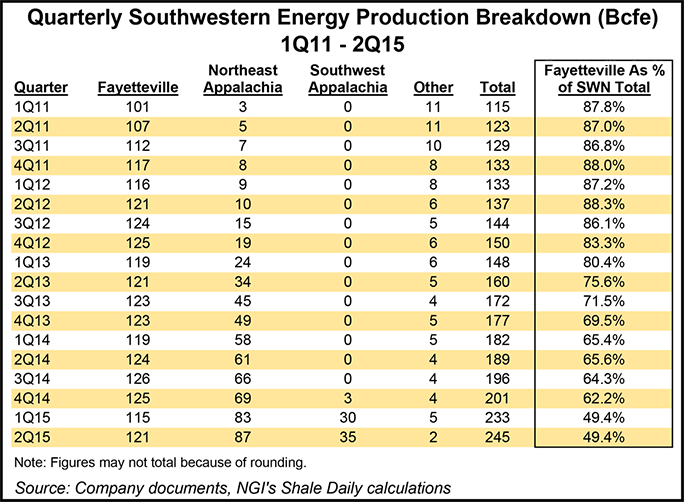 “A reduction in operations and shifting capital budgets across Southwestern Energy related to commodity prices, unavoidably led to a lower number of employees being required in certain areas,” she said. “Southwestern comprehensively evaluated various scenarios and carefully considered the impact to our employees.

“In many cases, employees were given the opportunity to transfer to other locations or positions. Nonetheless, positions were not available at this time for all our current employees.”

Of the 100-plus employees who were fired, 80 were working in Fayetteville operations. The other 22 people were in “various other locations,” Fowler said.

“This represents approximately 4% of our total employee population.”

Southwestern, which made its name in the Fayetteville, has over the past two years shifted its focus to the Appalachia Basin. During 2Q2015, the independent posted a record 245 Bcfe of production, a 30% gain year/year, and increased its 2015 output guidance (see Shale Daily, July 28).

However, the numbers showed the importance of the Fayetteville to the company was waning, with output at 121 Bcf from 124 Bcf. In Appalachia, total production increased year/year to 212 Bcf, including a jump in Pennsylvania to 87 Bcf from 61 Bcf. A new leasehold that stretches from southwestern Pennsylvania into West Virginia yielded 35 Bcfe.