Southwestern Energy Co. is producing about 400 MMcf/d in the Marcellus Shale and doesn’t foresee any constraints in moving natural gas to markets north or south for the next couple of years, executives said Friday. 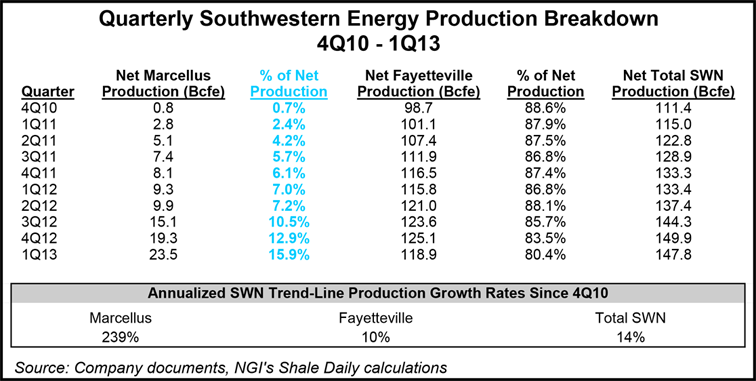 A firm transportation contract will carry about 600 MMcf/d through 2015, and then another transport agreement kicks in to carry 750 MMcf/d, COO Bill Way told analysts during an earnings conference call. The company is going to be “able to move all of our gas through the end of the year and through the end of next year with no constraints…

“We’re slightly ahead of schedule, but we are utilizing other transportation released in the area and balancing that with incremental transportation if we need it.”

Tennessee now is moving some volumes south, and the Millennium line is set to ramp up “within days,” Way said. “We’ve been able to move all of our gas south with that activity, and now we will be able to split some north to Millennium…”

Southwestern also has all of its infrastructure in place in Lycoming County, PA, and “really, the next sort of question mark becomes the timing of longer term projects. We’re doing some work around those to make sure we have capacity in place in the longer term.”

The company had some “challenges early on” this year because of bottlenecks, but “those are now behind us…We got off to a slower start than we planned to get wells connected to sales. There were some troubles in January with the weather, and only two wells were brought on. We soon made up for it and brought on 19 more by the end of the quarter.

“Now we’re hitting our full stride and are back on pace. Gross production already has reached 400 MMcf/d and we should surpass 500 by the end of the year.”

Southwestern, which now operates about 175,300 net acres in the Marcellus, last Monday almost doubled its holdings in a deal with Chesapeake Energy Corp. that adds another 162,000 net acres (see Shale Daily, April 30). The transaction includes about 40,000 net acres whose leases are set to expire over the next two years that Southwestern may let lapse, said CEO Steve Mueller.

The company’s management knew that going in and budgeted out production plans ahead of time, said Mueller. “This is acreage that has some four- and five-year terms on it, with extensions that are expensive, probably in the $3 million to $4 million range to extend,” he said. “Some of it will come up in 2013 and ’14. But when we did the analysis, we assumed that acreage would not renew…

“In general value, we think that…about half the acreage will have wells better than 5 Bcf on them. The real key for us, when we did the analysis, was if gas was $4.00 flat forever, we could have 70 wells with returns. That’s very profitable, and we know we will have more than 70 wells.”

There could be one or two wells drilled on the new acreage before the end of the year, but activity won’t increase substantially before next year, Way said.

Including the Marcellus, Southwestern produced a total of 147.8 Bcfe in 1Q2013, which was 11% higher than a year earlier. Nearly all of the output gains were in natural gas. In the first three months Southwestern produced 147.5 Bcf, versus 133.3 Bcf a year ago. Oil production totaled 41,000 b/d, compared with 24,000 b/d. The company also produced 20,000 b/d of natural gas liquids in the latest period; it reported none a year ago.

“We had a very good first quarter, which includes posting the highest first quarter cash flow in our company’s history,” said Mueller. “This results from our production…and our constant focus on keeping our costs low…When you add on top of this the sizeable acreage acquisition in the Marcellus we announced…and our continued optimism about our new ventures projects, we are looking forward to delivering even more value during 2013.”

Marcellus production has grown from less than 1% of total Southwestern production in 4Q2010 to 16% in 1Q2013. Meanwhile, Southwestern is becoming somewhat less reliant on its signature Fayetteville Shale acreage, where production actually fell sequentially in the first quarter.