For 2013, Southwestern Energy Co. is dialing down spending by $100 million but expects to increase net natural gas and oil production by 11-13% from this year. Drilling is increasing on the eastern side of the Fayetteville Shale, and new pipeline infrastructure is taking more gas to market from the Marcellus Shale, the company said. 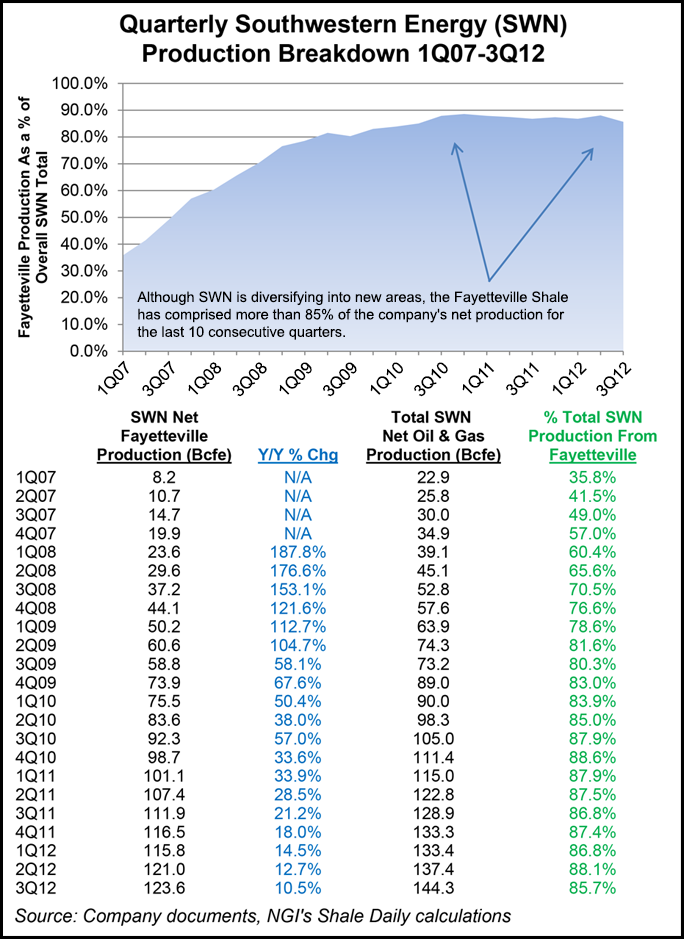 “In the Fayetteville Shale, we will continue to drive our costs and drilling time down as our newly acquired frack fleets become operational and our target is to invest within cash flow,” said CEO Steve Mueller. “In the Marcellus Shale, the [takeaway] infrastructure build over the past two years will enable a significant ramp in production from all of our acreage holdings in this highly economic project.”

In its new ventures business, Southwestern plans to keep going after the Lower Smackover Brown Dense oil play in southern Arkansas and northern Louisiana, as well as drill more wells in its Colorado and Montana projects. There will be be “at least one more new project in 2013,” Mueller said.

Capital investment in 2013 is planned to be about $2 billion, down from about $2.1 billion in 2012. Next year’s spending will consist of $1.8 billion for exploration and production (E&P), $160 million for midstream and $40 million for corporate purposes. Of the $1.8 billion for E&P, $1.3 billion, or 75%, will be invested in development and exploratory drilling, $14 million in seismic and other geological and geophysical expenditures, $109 million in leasehold and $318 million in capitalized interest and expenses and other equipment and costs.

“This announcement should have a slightly negative valuation impact due to a slightly lower capex outlook and a corresponding lower production outlook relative to our modeled expectation,” said analysts at Canaccord Genuity. However, Tudor, Pickering, Holt & Co. (TPH) analysts saw the Southwestern news as positive due to more production relative to their estimate of an increase of 10% for less spending.

In the Fayetteville, Southwestern plans next year to drill 385-390 gross wells, all operated. Drill times are expected to decline slightly to about 6.5 days from 6.8 days. The average 2013 completed well cost in the Fayetteville is estimated to be $2.7 million with a 5,100-foot average horizontal lateral, compared with an estimated $2.8 million with an average horizontal lateral length of 4,600 feet in 2012.

Southwestern has seen production from the Fayetteville grow significantly over the last five years, reaching 123.6 Bcfe in 3Q2012, and the play has comprised more than 85% of the company’s net production for the last 10 consecutive quarters.

In the Marcellus, Southwestern plans to manage its production increase to available capacity and drill 86-88 gross wells, all operated. Of these, about 35 will be in Bradford County; 40 wells will be in Susquehanna County; and 12 wells will be in Lycoming County. Drill times are expected to decrease to 13 days from 13.1 days. The average 2013 completed well cost in the Marcellus is estimated to be $7.1 million with a 4,700-foot average horizontal lateral with 15 completed hydraulically fractured (frack) stages, compared to $6.3 million with an average horizontal lateral length of 4,100 feet and 12.7 completed frack stages in 2012.

In new ventures areas, including its Lower Smackover Brown Dense, Southwestern said it plans to drill up to nine gross wells.

As of Dec. 18, Southwestern had hedges in place on notional volumes of 185 Bcf of its 2013 projected gas production. The weighted average floor price is $5.06/Mcf. Assuming a New York Mercantile Exchange commodity price of $3.50/Mcf for gas in 2013, the company is targeting net income of $525-535 million.

During the current quarter in the Fayetteville, Southwestern said it expects to place about 100 wells on production. Average initial production rates for these wells are estimated at 3.8-4.0 MMcf/d.

And in the Lower Smackover Brown Dense, Southwestern tied two wells into a new pipeline on Nov. 29. Daily production of both oil and gas from the company’s third and sixth wells continued to increase as flowback fluids are recovered, Southwestern said. The fifth well is producing oil at “relatively stable rates” after 70 days. The TPH team said it was hoping for more information on the Brown Dense.

During the third quarter, Southwestern grew gas and oil production by 12% from a year ago. Costs declined in the Fayetteville while well results improved. Marcellus production more than doubled from the year-ago quarter (see Shale Daily, Nov. 5). 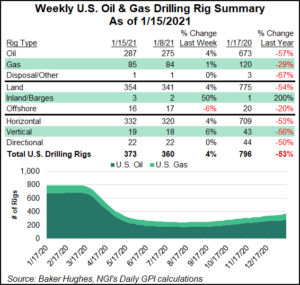