Southwestern Energy Co. said Tuesday it has a deal with the North American subsidiary of Uniper SE to supply independently certified natural gas for domestic and international distribution. 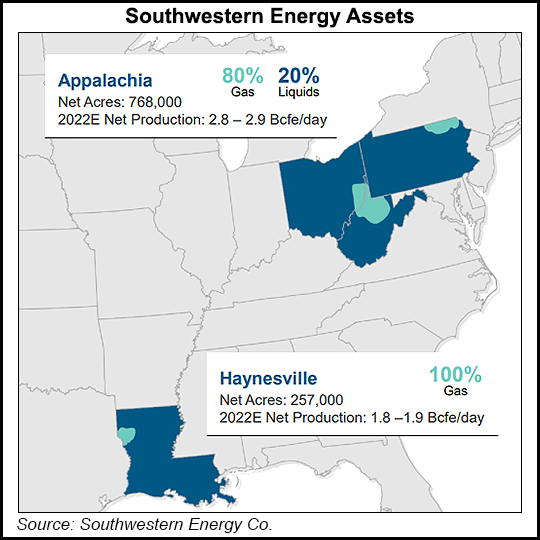 The agreement pairs Southwestern, the second largest U.S. natural gas producer, with an affiliate of Uniper, one of Germany’s largest energy supply companies, at a time when buyers across the world are searching for differentiated natural gas and new supplies in a pivot away from Russian volumes.

Southwestern said the Uniper affiliate would utilize the responsibly sourced gas for domestic distribution to downstream customers. The supply would also go to U.S. liquefied natural gas (LNG) terminals for export to global LNG markets. Third parties certify that gas has a low-emission profile and is produced in an environmentally responsible way.

“Southwestern Energy is strategically positioned to supply the world’s growing energy demands with its responsibly sourced gas,” said CEO Bill Way. “We believe natural gas is foundational to a low carbon future, and that U.S. natural gas in particular plays a vital role in supporting global energy supply and security.”

Terms of the deal were not disclosed, but Southwestern said it covers a “multi-year” period. The first U.S. LNG cargo filled with certified natural gas is expected to be exported this year. Efforts are also underway to better track emissions and certify operations along the LNG value chain.

“Transparency in energy production practices is a growing market interest, and agreements like this one are key to deploying responsibly sourced solutions for customers in the U.S. and abroad,” said Uniper’s Marc Merrill, CEO of the North American operations.

Equitable Origin, MiQ and Project Canary have certified, or are in the process of certifying, more than 30 Bcf/d of natural gas in the United States and Canada as buyers search for alternative supplies.

Southwestern and other North American exploration and production companies have stepped up efforts to gain more exposure to U.S. LNG exports. Southwestern said it is already marketing 1.5 Bcf/d to U.S. liquefaction terminals. Management said during the first quarter earnings call in May that it is exploring more opportunities to expand its role in the LNG sector.