Southwestern Energy Co. this week said it would become the nation’s first exploration and production (E&P) company to certify that its natural gas is responsibly produced from all of its wells across an entire basin. 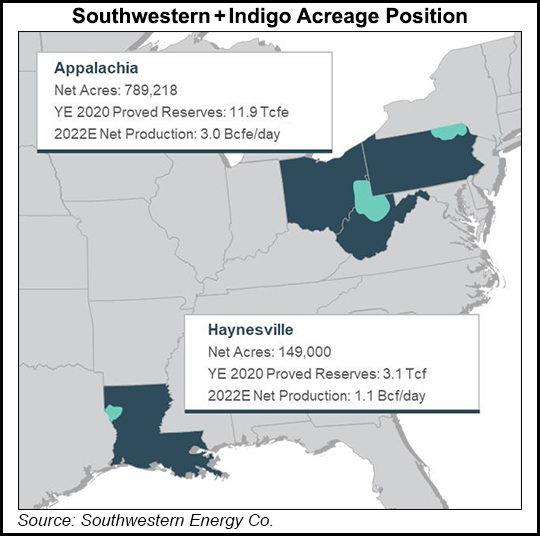 The company reached an agreement for Project Canary to continuously monitor emissions and certify responsibly sourced gas (RSG) from all wells across the Appalachian Basin. The company produces 3 Bcf/d across more than 789,000 net acres in Ohio, Pennsylvania and West Virginia, making it the country’s third largest natural gas producer.

Southwestern’s agreement moves beyond pilot projects to certify RSG and monitor emissions at select well sites that other producers have signed. The Houston-based E&P was an early RSG adopter, certifying its first Appalachian wells in 2017 with Independent Energy Standards Corp., which merged with Project Canary last year. Southwestern has since completed six RSG sales agreements, some of which come at a premium to local Appalachian index prices.

“In 2017, we saw the potential for a differentiated market that values responsibly sourced gas, and today, we add another milestone by becoming the largest independent producer to certify and continuously monitor its entire base production,” said CEO Bill Way.

The pilot projects underway at other E&Ps are becoming meaningful as well, given that RSG agreements currently in place now cover about 10% of all U.S. natural gas production.

Project Canary now has deals in place with roughly 40 companies to monitor environmental performance across the upstream, midstream and downstream sectors.

Project Canary would certify Southwestern’s Appalachian production through its TrustWell certification process. The program measures several metrics to certify the conditions under which gas is produced to gauge impacts and risks, with a focus on water, air, land and community. The ultimate output is a rating similar to a Leadership in Energy and Environmental Design, aka LEED, rating for a building.

Southwestern is currently an Appalachian pure-play. The Project Canary agreement does not cover any of the 149,000 net acres in the Haynesville Shale that Southwestern would acquire in the takeover of Indigo Natural Resources LLC. That deal is expected to close by the end of the year.