Southwestern Energy Co. said Friday it would increase both production and spending this year in response to inflation. The company also plans for a 2023 maintenance program, and free cash flow would be strengthened by the move. 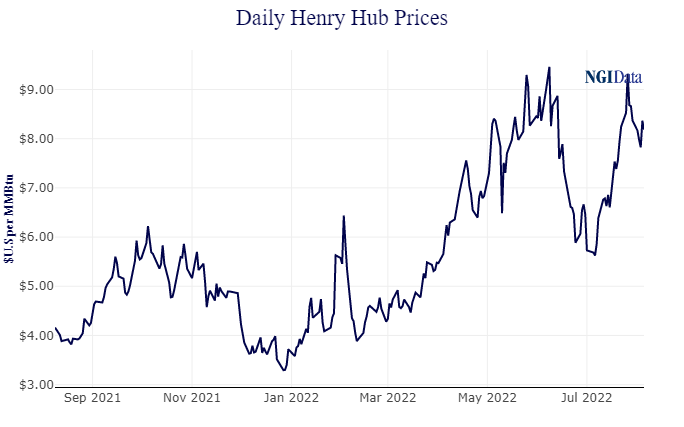 COO Clay Carrell said a second company-operated fracture fleet would be added in Appalachia by the end of September, displacing a third-party crew. It also plans to reposition a Southwestern-owned rig to the Haynesville later this year, “which we expect to further improve performance, compress cycle times and reduce costs,” he said. The company-owned fleet and equipment are expected to help control ballooning oilfield costs.

“In addition to our vertical integration, our proactive planning, purchasing, direct-sourcing and key service provider relationships are ensuring the availability of  goods and services required to deliver on our plan both this year and next,” Carrell told analysts during a call to discuss the second quarter results.

The company is spending about 55% of this year’s capital in the Haynesville Shale and 45% in the Appalachian Basin, a split that isn’t likely to change much next year, said CEO Bill Way.

“The U.S. natural gas market continues to move from structural oversupply to a more balanced market, with the potential for further excess demand, especially in the Gulf Coast region,” Way said.

Southwestern is among the nation’s largest natural gas and natural gas liquids producers. It is the largest producer in the Haynesville, and “with complimentary firm transportation from Appalachia,” around 65% of the company’s production reaches the Gulf Coast market, he added.

“We are evaluating on a risk-adjusted basis, potential opportunities to benefit from global pricing by leveraging our approximate, reliable, long-term supply capability to help enable liquefaction projects” achieve sanctioning, he said.

The company produced 438 Bcfe in the second quarter, well above the 276 Bcfe for the same period last year. The jump came after the company acquired GEP Haynesville and Indigo Natural Resources LLC last year, boosting its assets significantly in Louisiana.

Appalachia continues to account for most of Southwestern’s volumes. The company produced 269 Bcfe there during the second quarter, while Haynesville output was 169 Bcf (100% natural gas).

Southwestern also reported big gains related to commodity prices during the second quarter. Including derivatives, average realized prices were up 38% year/year to $3.04/Mcfe. Revenue jumped from $1 billion to $4.1 billion over the same time.