Devon Energy Corp. and Southwestern Energy Corp., two of the biggest U.S. onshore operators, announced this week they would lay off employees over the next couple of months, with Southwestern expecting to fire or reduce the roles of about 45% of its entire workforce. 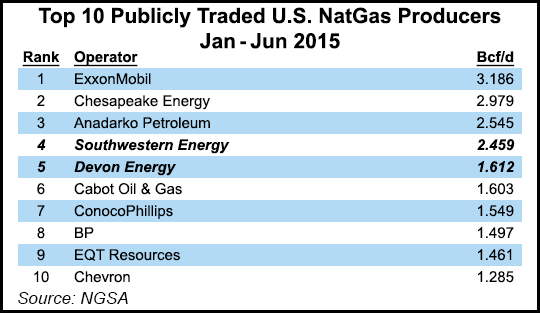 Houston-based Southwestern, a natural gas-heavy independent whose work today is focused in Appalachia, said Thursday more than 1,100 employees are expected to be affected.

“Natural gas prices have continued to decline over the past year, creating conditions where cash flow to fund projects will be significantly lower than it has been the past few years,” a Southwestern spokeswoman said. “These organizational changes are required to maintain competitiveness in this low gas price environment.”

Management added that the workforce reductions “result primarily from anticipated lower drilling activity. At the start of 2016, the company had no drilling rigs in operation but has not finalized its capital budget and operating plan for the year.”

Southwestern is providing outplacement services, employee assistance and other benefits to support impacted employees and their families through the transition. Last August Southwestern laid off more than 100 people, mostly from the Fayetteville Shale operations in Arkansas, which at the time represented 4% of the total workforce (see Shale Daily, Aug. 7, 2015).

“Affected employees are being offered a severance package, which includes a one-time cash payment depending on length of service and, if applicable, amendments to outstanding equity awards to modify forfeiture provisions on separation from the company,” the producer said. “Some affected employees are being offered the opportunity to accept reduced roles with the company.”

No details were offered as to whether executive management was included in the forced reductions or the offer to accept reduced roles. Southwestern’s plan is to be “substantially implemented” by the end of 1Q2016. The operator expects to record first quarter pre-tax charge of $60-70 million, including $45-50 million for one-time cash severance payments and tax payments; and $15-20 million for costs associated with eliminating service requirements for equity awards to some terminated employees. The workforce reductions are expected to decrease current costs by about $150-175 million a year.

Devon, headquartered in Oklahoma City, announced layoffs on Wednesday during a town hall meeting with employees, but management offered no details on the number of people who may lose their jobs. Devon works in several big onshore basins across the country.

“To maintain our financial flexibility while oil and natural gas prices remain weak, Devon continues to thoroughly examine all options to lower the company’s cost structure,” the company said. “After careful consideration, it’s clear that layoffs will be a necessary part of the company’s near-term cost-management efforts.”

Like Southwestern, the company expects “the majority of layoffs to occur by the end of the first quarter.”