The world’s growing appetite for U.S. liquefied natural gas (LNG) continued to take center stage during earnings calls at two more of the nation’s top exploration and production companies, with management at both acknowledging the opportunities and challenges that come with meeting rising demand. 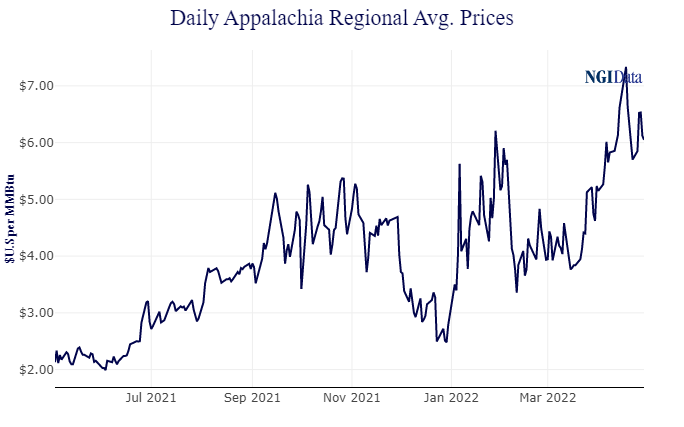 “We’re having conversations with current and future key LNG players and continuously looking at value-enhancing opportunities on a risk-adjusted basis…to enter into additional agreements down the line.,” CEO Bill Way said Friday during the company’s call with financial analysts.

Southwestern is also the largest producer in the Haynesville, where strong nearby LNG demand and higher domestic gas prices have set the stage for resurgent development.

“We’ll continue the dialogue and narrow down facilities that fit the kind of agreements we are interested in pursuing and we want to be an enabler of that,” Way said. “There is going to be a very big call on demand of natural gas for this ramp up in LNG, and we think we’re positioned quite well – advantageously –  to work in that space.”

Europe and Asia, where natural gas prices have surged this year, are poised to compete more fiercely for LNG cargoes as buyers turn away from Russian imports in response to the invasion of Ukraine. U.S. natural gas prices are trading at a steep discount to overseas benchmarks, making American LNG even more attractive.

The Biden administration has also committed to fast-tracking LNG plant approvals and sending more supplies to Europe as Russia threatens energy security on the continent. There are roughly 20 LNG projects under development in the United States.

U.S. producers are seizing the moment this earnings season to promote the climate and economic benefits of American natural gas. During its call, the nation’s largest producer, EQT Corp., touted its initiative to boost U.S. LNG export capacity to 55 Bcf/d by 2030.

CNX Resources Corp. CEO Nicholas DeIuliis chimed in with less optimism. He said that for all the talk about rescuing overseas buyers with additional supplies, there are significant domestic challenges that remain before higher output can be unlocked.

He said the nation’s producers can’t ramp up gas volumes quickly because of infrastructure constraints. That’s particularly true in the Appalachian Basin, where CNX is a leading producer. Years of opposition from environmental groups have stopped pipeline projects altogether and created legal hurdles for other systems under development.

DeIuliis said a large part of the setbacks are “simply and starkly because of policy that has consciously and methodically looked to strangle infrastructure investment in the pipes, processing, power generation and LNG infrastructure that is needed to meet the world’s energy demand.”

He said measures at home and abroad such as the Paris Accord and Regional Greenhouse Gas Initiative have “deliberately handcuffed” the country’s ability to quickly respond to the world’s energy needs.

“For our industry to solve problems and provide solutions, it will unfortunately take years,” Deluliis said. “The domestic energy industry has been under attack and penned-in for over a decade by these policies. And now it will take nearly as long to correct that.”

Southwestern’s Jason Kurtz, vice president of marketing and transportation, said the Gulf Coast could see a significant spike in gas demand as the LNG buildout continues and brings with it more industrial end-users and power consumers.

“It’s going to play out to where there is going to be a lot of competition for gas in this general area, and there is not a lot of new capacity that’s going to be built out of other basins to be able to get in this area,” he said of the Gulf Coast. “So, we feel like we’re in a key strategic position to be able to take advantage of these premium priced markets.”

The company said it was so far seeing strong initial production rates from its new Haynesville assets. The company expects to spend about 55% of its capital in the play this year, with the other 45% going to Appalachia.

The company reported first quarter production of 425 Bcfe, up from 269 Bcfe in the year-ago period thanks to the new assets. Southwestern also expects to have nearly 5 Bcf/d of natural gas production independently certified by the end of the year to help meet the growing environmental standards of domestic and international buyers.

Both companies also wrestled with inflationary pressures for steel, labor and sand as their peers did during the first quarter, but the management teams said they were successfully working to offset some of those costs with operational efficiencies.

CNX continues to stick with a seven-year plan it laid out during the Covid-19 outbreak in 2020 aimed at stable operations and free cash flow generation.

Both companies earned higher prices during the quarter, but results were squeezed by steep derivatives losses.