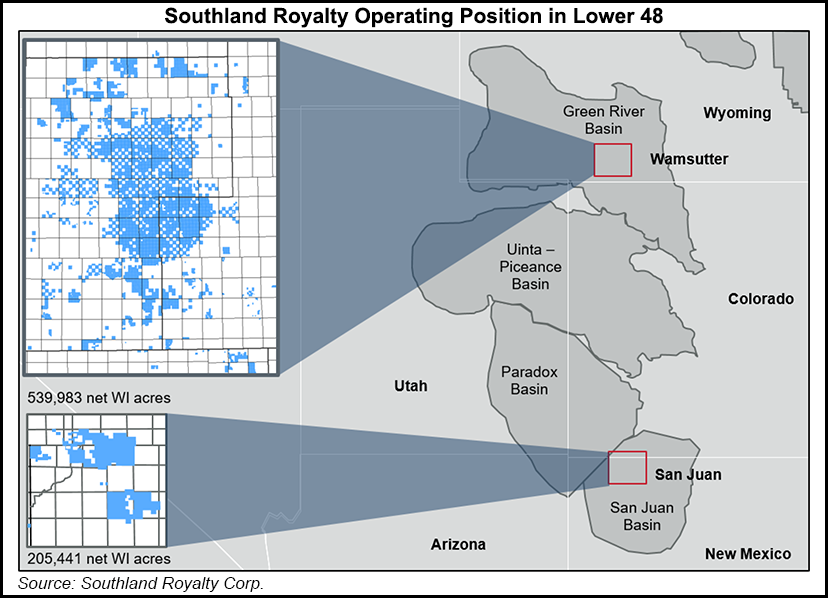 The Fort Worth, TX-based producer owns leasehold interests in 595,000 net acres between the Wamsutter field in the Green River Basin of Wyoming, and in the San Juan Basin of southwestern Colorado and northwestern New Mexico. In the Wamsutter, it also has 150,000 net working interest mineral acres and surface rights on 87,000 gross acres.

In a court filing, Chief Restructuring Officer Frank A. Pometti said “the sustained downturn in the oil and gas sector has created an extremely challenging environment” for Southland, “depressing revenues generated by production activities, while at the same time reducing the value of proven reserves.”

Southland is facing a number of challenges. “Some of the very measures taken to mitigate cash depletion contributed to the resulting liquidity crunch,” Pometti said. “At its core, the distress in the industry is a function of commodity prices and the decades-long disruption caused by hydraulic fracturing and horizontal drilling.

“And while it is commonly understood that oil and gas prices have remained relatively low in comparison to prices before 2015, less appreciated is the recent decline in gas pricing.” The slump in commodity prices resulted in materially reduced cash flow and simultaneously led to a decreasing value in proven reserves.

For Southland, “the dip in NGL prices has been especially dire: realized NGL pricing for the San Juan and Wamsutter field has declined approximately 70% from the third quarter of 2018,” Pometti said. “This collapse came just after the debtor entered into a material midstream agreement with Wamsutter LLC (Williams),” otherwise known as the L63 agreement, “with substantial MVCs that are now unsustainable.”

Southland is contesting the L63 agreement and another with Williams, the L60 agreement, each of which contain MVC provisions to ensure Williams receives an adequate return on capital.

The challenge is a Catch-22. To conserve cash in the short term, Southland limited its drilling and capital (D&C) expenditures. Over the long term, however, the reduced spend is going to deprive it of “additional revenue and result in sizable payments” under the MVC agreements.

“Several wells in the Wamsutter field have underperformed over the past year, further exacerbating the MVC deficiencies…As a result, the debtor is now subject to significant and escalating MVC deficiency payments beginning with a payment of approximately $900,000 under the L63 agreement and a payment of approximately $3.1 million under the L60 agreement, each of which became due on Jan. 25, 2020,” Pometti wrote.

The total potential MVC deficiency payments due over the lifetime of the Williams agreements “could be as high as $895 million on an undiscounted basis.”

For nonpayment, Williams is able to take gas-in-kind, which would squeeze Southland even more, eliminating cash flow. Williams also has contractual rights to suspend service, demand additional assurance, or in some cases terminate the contract if Southland is unable to perform. “The sheer magnitude of the debtor’s escalating MVC obligations, combined with Williams’ remedies in the event of nonpayment and the need to restructure the credit facility indebtedness, obliged the debtor to develop and explore a Chapter 11 strategy,” Pometti said in the filing.

On Jan. 8, Williams took two actions that accelerated Southland’s “need to file for Chapter 11 relief,” he said. First, Williams sent Southland a demand for adequate assurance of MVC payments and requested a cash payment of $6.9 million within 48 hours. A short-term agreement was reached, and Williams was paid $1.7 million, with the additional $4 million due last Saturday (Jan. 25).

Also on Jan. 8, Williams filed a memorandum of the L63 agreement in the real property records of Wyoming’s Carbon and Sweetwater counties “in a late effort to perfect the dedication interest the debtor granted in November 2018,” Pometti said. Southland now disputes that it ever agreed to the form of memorandum Williams filed.

In litigation pending in Wyoming state court, BP, which leases mineral interests owned by Southland, is seeking a declaratory judgment regarding BP’s obligations to maintain production in paying quantities.

“If Southland prevails in the BP litigation, it would be vested with fee simple unencumbered title on at least 55 square-mile sections, which could then be re-leased or otherwise developed,” said the chief restructuring officer. Southland has obtained summary judgment “on the key legal issue at the trial court, but corollary issues remain contested and an appeal may follow.”

The BP lawsuit, said Southland, has limited its ability to drill some locations and led to “over-development of certain other sections in the Wamsutter.” In addition, BP in early 2018 “paused development of its Wamsutter interests, which negatively impacted the debtor’s projected nonoperated production growth and cash flow due to reduced royalty interest payments.”

For Southland to return to profitability will require “a rightsizing of its capital structure and fixed costs of production relative to its revenue-generating capacity in the current market,” Pometti wrote.

Southland plans to either sell the business to a purchaser that could “give it a fresh start, or, if an attractive sale is not attainable, by deleveraging its balance sheet through a Chapter 11 plan.”

The credit crunch extends to the redetermination of Southland’s credit facility borrowing base, which in December was set at $400 million. However, Southland already had fully borrowed $540 million under the credit facility, which means it now is required to make deficiency payments totaling $140 million within six months.