Europe has received its first shipment of natural gas via a $40 billion infrastructure project that took seven years to complete, further diversifying the continent’s energy supplies. 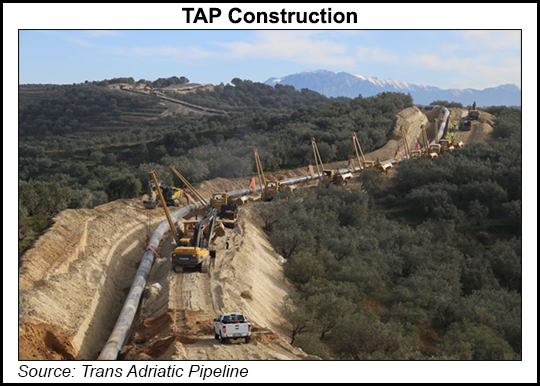 Commercial operations started last month on the 546-mile TAP, but the first natural gas reached the line’s terminus in Italy on Thursday, Socar said. TAP is part of the broader Southern Gas Corridor that was pushed by the European Union and backed by the United States to diversify natural gas supplies on the continent, mainly in an increasing pivot away from Russian sources.

The corridor infrastructure crosses seven countries and moves over 2,000 miles to pair natural gas production in the Caspian Sea with European burner tips. The system involved more than a dozen energy companies and consists of several separate projects. It was sanctioned seven years ago and is largely underpinned by 25-year gas sales agreements with European distributors.

“Back then, some were skeptical about this project,” said Socar President Rovnag Abdullayev. “Now the mission is accomplished — Azerbaijan’s natural gas has arrived in Europe. Coming from a new source through an alternative route, it will contribute to European energy security.”

TAP transports natural gas from the massive BP plc-operated Shah Deniz field offshore Azerbaijan, the company’s second-largest ever discovery after the Prudhoe Bay field in Alaska. TAP connects with the Trans Anatolian Pipeline at the Turkey-Greece border, and crosses Greece, Albania and the Adriatic Sea before coming ashore in Southern Italy.

TAP will eventually supply gas to countries in southeastern Europe through prospective interconnections. Socar said Bulgaria would be able to cover up to 33% of its total natural gas demand through TAP after the completion of an interconnector to Greece.

Europe is the largest natural gas importer in the world, with deliveries coming in various directions from pipelines and liquefied natural gas receiving terminals. But some parts of the continent, primarily Western Europe, are better connected than others.

“We anticipate a growing demand for additional gas volumes on the European market due to the constant local production decline,” Abdullayev said.

TAP has a current operational capacity of 10 billion cubic meters (Bcm) annually, but a second phase of the project is expected to open in 2021 to test support for an expansion that could double the pipeline’s capacity to 20 Bcm.