South Asian LNG buyers, particularly Pakistan and Bangladesh, are finding it difficult to pay high spot prices as the region moves into the winter season. Meanwhile, India has too much of the super-chilled fuel because domestic consumers refuse to pay top dollar. 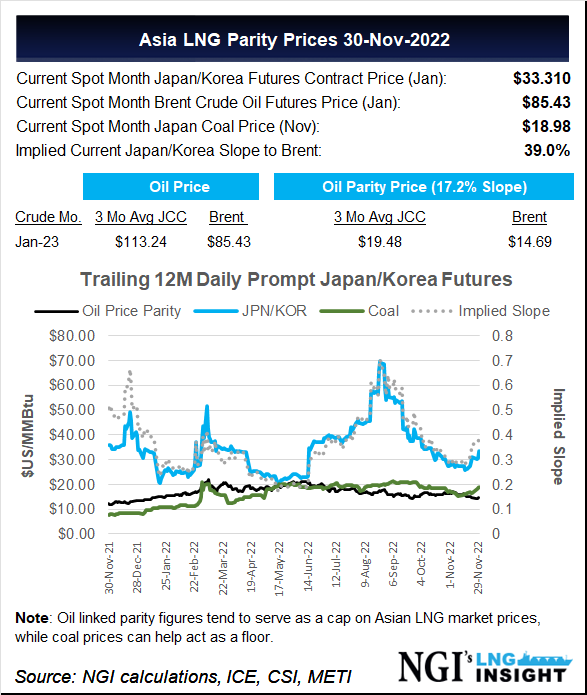 Asian liquefied natural gas spot prices jumped last week, hitting a seven-week high, after Gazprom PJSC said it may further reduce gas deliveries transiting Ukraine to Europe. The company walked back the threat, but colder weather in parts of Asia and Europe has spot prices hovering in the mid-$30s/MMBtu.

“Now it comes down to weather,” lead consultant David Hewitt of Hewitt Energy Perspectives told NGI. “ Japan is forecasting colder-than-usual temperatures in the second half of the winter. Europe has been extremely mild but just beginning to turn.” The floating storage and regasification units that Europe has chartered “will start to ramp up early next year,  potentially creating demand that may pull LNG cargoes away from Asia.”

Since the start of the Russia-Ukraine war in February, Pakistan has had difficulty buying in the spot market. The country’s 10.65 million gas consumers face a winter of severe gas shortages as the government has scarce financial reserves to purchase spot cargoes.

Pakistan relies on LNG imports to sustain gas-fired power plants that have been underutilized as domestic gas production has declined. There have been no major gas discoveries in the country since 2000.

“Pakistan and Bangladesh remain price-sensitive buyers, which means they continue to struggle to secure LNG spot cargoes on the back of high Asian spot prices,” which have competed with Title Transfer Facility prices “since this summer,” said Kpler LNG analyst Ana Subasic.

Institute for Energy Economics and Financial Analysis (IEEFA) analyst Shafiqul Alam agreed. “Although the price of LNG has significantly decreased in recent months, current spot prices are still much higher than the $8/MMBtu of LNG Bangladesh paid in 2020-2021,” he said.

In response to gas rationing, Bangladesh’s Prime Minister Sheikh Hasina recently gave permission to the private sector, rather than the government, to buy LNG to meet increasing gas demand needed for power generation.

“Since the factory owners are willing to pay more for gas, let them buy gas,” Hasina said at a government meeting.

However, Alam told NGI, importing LNG by the private sector in Bangladesh “requires a careful assessment so that the government does not incur additional fiscal burdens. Expensive fossil fuels mean renewable energy is more attractive. This is an opportunity for Bangladesh to increase renewable energy capacity and reduce dependence on costly fuels like LNG.”

Bangladesh usually buys LNG on a government-to-government long-term basis with Oman and Qatar, but the two producers have declined additional supply requests. Bangladesh has a long-term contract with Qatar to supply up to 2.5 million metric tons/year (mmty) of LNG, but Qatar said it could not increase supply before 2025. Oman also refused to add volumes to  Bangladesh’s 1.5 mmty contract. As a result, Bangladesh is negotiating with Brunei for a 10-15 year contract for 1.5 mmty starting early next year.

Too Much LNG For India

Power generation with expensive LNG is not competitive with other fuels, so there has been an increased allocation of domestic gas to the power sector this year, IEEFA energy analyst Purva Jain told NGI.

Kpler’s Subasic said India’s power, city gas and refining sectors have turned to fuel substitution to avoid consuming LNG. Regulated domestic gas prices have increased recently by almost $2.50/MMBtu and will remain at this level until March 2023, she said.

“We are seeing more instances of tank topping, which is an indicator of weak downstream demand,” Subasic added. “Also, any further gas production in India might further weigh on inactivity in the Asia spot market and perpetuate further decline.”