India, Pakistan and Bangladesh are looking to buy LNG in an extremely tight market as top Asian buyers Japan and South Korea have come out to cover their winter requirements. 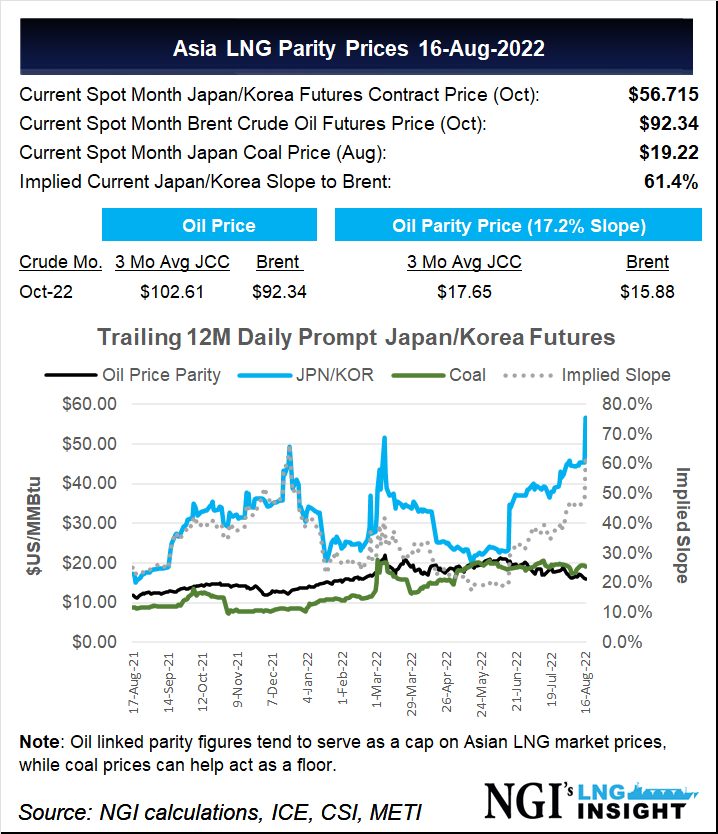 “While global markets have been focused on Europe and the supply dynamics there, the unintended consequences of energy sanctions on Ukraine are weighing heavily on many developing Asian economies,” the Oxford Institute of Energy Studies wrote in a report this month.

State-owned Pakistan LNG invited bids for 72 cargoes by September, or one cargo per month, over six years starting from January 2023. The country is suffering power shortages as demand increases through the summer months.

“Pakistan’s energy crisis will worsen over the next several weeks as the country struggles to secure LNG at an affordable price,” said Pakistan’s Musadik Malik, minister of state petroleum.

“Liquefied natural gas, which was priced at $4.00/MMBtu two-and-a-half years ago, is no longer available for even $40/MMBtu,” Malik said recently. “So, Russia’s war with Ukraine has created a real crisis. We don’t have enough energy right now… The situation is that we have carried out two rounds of tenders of three to four tenders each, but no one has responded to them,” Malik said.

The spot market has become especially brutal for less developed nations that don’t have the cash to splurge on cargoes fetching record high prices.

Asian spot prices hit their highest point since March this week and are near $60/MMBtu as larger buyers look to restock ahead of winter. They’re competing with buyers in Europe, where gas benchmarks have raced toward $70/MMBtu this week.

Pakistan imported eight cargoes in July, but all under long-term contracts at lower prices.

Bangladesh is in a similar situation. “The surging cost of LNG and coal imports are compounded by domestic gas supply shortages,” OIES wrote.

Half of Bangladesh’s floating storage and regasification units are unused, as high LNG prices have seen Bangladesh suspend LNG imports.

Japan’s JERA Co. Inc. offered a recent tender to purchase a cargo per month until March 2024 to cover the winter season. Japan could also be looking to secure more spot cargoes, and sourcing medium- to long-term volumes.

The recent decree signed by Russian President Vladimir Putin gives 100% control of the Sakhalin-2 LNG facility to a new Gazprom PJSC subsidiary, leaving uncertainty over how many cargoes Japan might receive in the future from Sakhalin-2. The plant provided roughly 9% of Japan’s imports last year.

Japan and South Korea combined are looking to secure slightly more than 5 million tons (Mt) of spot cargoes in August, September and October this year, “assuming that there is not much flexibility or uplift available from their long-term contract suppliers,” ICIS Analytics forecast in August.

“The spot amount is less than what was bought last year, but it is still nearly 80 cargoes of spot LNG just before winter.”

Asia’s biggest buyer, China, has been quiet. “Expectations are that China won’t return to the market in full force this year – as Covid lockdowns are expected to continue at least partially, which is likely to constrain industrial demand,” Rystad energy analyst Kaushal Ramesh told NGI.

Rystad recently revised their forecast for China’s LNG imports this year from 73 Mt to 67 Mt. Ramesh said next year’s forecast has also been revised from 85 Mt to 82 Mt.

“So, we are expecting a lasting lull in demand,” he added. “This frees up cargoes to help support Europe this winter.”

India Gail Ltd. is also facing an LNG supply deficit because Gazprom PJSC has missed shipments. Gail has a 20-year contract to buy 2.5 million metric tons/year from Gazprom Marketing and Trading (GMT), which was separated from Gazprom earlier this year.

“Since the separation, GMT’s portfolio supply from Yamal has been curtailed – leaving them short on cargoes,” Ramesh said.

GMT was supposed to deliver 36 cargoes to India this year, and so far has defaulted on supplying 8 cargoes. The GMT contract makes up about 8-9% of Gail’s annual total gas sales, so it would impact gas supply used by the fertilizer sector as feedstock.

“We are looking at all types of contracts – short, medium and long. But the market today is that short-term volumes are not available at the desired price,” said Gail’s Finance Director R K Jain on a recent call to discuss financial results. “We are in the market for sourcing long-term gas not only to meet the current crisis but also to meet the increasing demand of the country.”

Gail controls about 70% of India’s gas transmission and nearly 50% of the country’s gas trading market. The company is trying to shuffle cargo deliveries by asking for deliveries that are due in 2023 to be delivered this year. It’s also working to secure U.S. cargoes and buy others from the spot market to meet its domestic obligations

“But since the European Union is not yet out of the woods,” Ramesh said, “the nervousness is likely to result in volatility and a continued high price environment this winter.

“We should expect to see Title Transfer Facility prices in excess of  $35/MMBtu. Japan and South Korea are already prepping for winter, but if they end up needing cargoes, we could see a bidding war push prices over $70 MMBtu.”