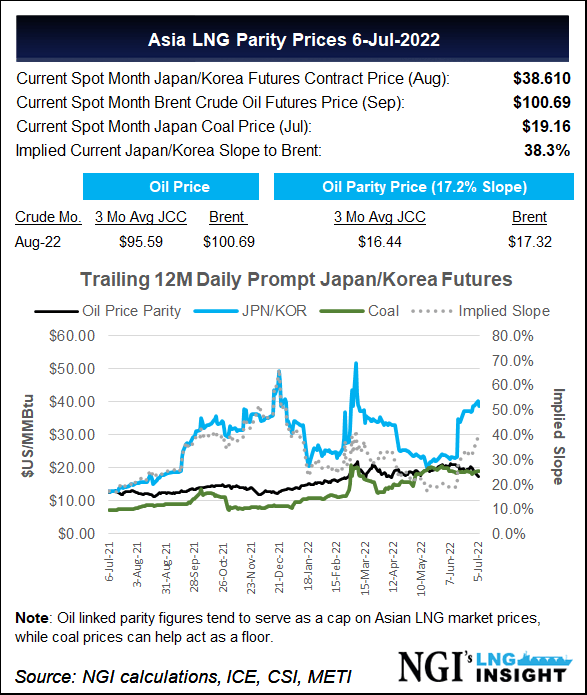 As Russia’s war in Ukraine continues, and the Kremlin has limited exports, European countries have rushed to replace Russian pipeline gas with LNG imports, creating a competitive and expensive global spot market that’s made some small and large buyers alike hesitant to buy cargoes on short notice.

Asian spot prices continue to rise, hovering around $40/MMBtu, as a recent heatwave in Japan reportedly forced utilities to buy prompt cargoes. Meanwhile, Russia’s announcement to take full control of the Sakhalin-2 LNG project, Nord Stream 1 maintenance issues, and the threat of a prolonged strike in Norway have all contributed to a strong market as both Asia and Europe compete for LNG.

“For India, Pakistan and Bangladesh, who are known for their price sensitivity, the prospect of buying LNG at over $30/MMbtu is forbidding, said Rystad Energy analyst Kaushal Ramesh. “This high price environment is likely to spur the use of coal and fuel oil, and where neither are available, the results are rolling blackouts in Pakistan.”

Sandeep Pai, senior research lead at the Center for Strategic and International Studies, told NGI that “after Covid, these countries are trying to recover, and now there is a power and  industrial energy crisis. I think it is going to be difficult  because of this dual problem in India and Pakistan of a coal shortage and a gas shortage, and high temperatures mean more energy demand.”

Global LNG spot trade flows have changed since Russia’s invasion of Ukraine last February. U.S. LNG producers have favored Europe as the preferred destination over Asia. Roughly three quarters of all American cargoes have gone to Europe this year, according to the Energy Information Administration (EIA).

“When Europe’s dependence on gas from Russia didn’t go well, it impacted almost everyone in Asia, especially in poor countries, like India, Pakistan and Bangladesh,” Pai said.

Governments and state-owned companies in India, Pakistan, and Bangladesh are unwilling, or not able to finance spot LNG imports, and have reduced spot purchases  due to rising prices since late last year. India was the world’s fourth largest LNG importer last year, taking in about 24 million tons of the super-chilled fuel.

Buyers in Pakistan and Bangladesh had also been purchasing higher volumes, but spot prices have steadily increased since last year, hitting a record high of nearly $70/MMBtu in Asia in March.

“The issue is that these countries have gotten used to low spot prices and left their purchases overexposed to what has proven to be tremendous price volatility, Ramesh told NGI. “ Although they might be able to use some flexibility within term contracts to increase imports, we are definitely not expecting to see the kind of buying activity that we saw when prices were less than $10/MMBtu.”

Supply disruptions, power outages, and energy rationing in India, Pakistan, and Bangladesh  have become the norm since last year as prices have climbed and supplies have grown tighter.

Pakistan’s gas consumption increased to 44.8 billion cubic meters (Bcm) last year, up from 35.3 Bcm in 2011, or 2.4% annually, according to government data.  With two operating LNG import facilities and four proposed import projects, it is heavily dependent on oil and gas imports for power generation.

LNG imports into Pakistan are down 13% for the first half of 2022 compared to the same period for 2021, according to Rystad data. Nearly 10% of  Pakistan’s power supply was stranded in April due to LNG shortages causing load shedding and nationwide power outages, Bloomberg reported.

Pakistan canceled a third spot LNG tender in June, as State Bank of Pakistan’s foreign exchange reserves fell to less than $9 billion. The country’s total commodity imports, including petroleum products and LNG, cost $6.6 billion in May alone, according to government data. The government also confirmed this week a Bloomberg report that it canceled a fourth spot LNG tender to pay $1 billion for 10 cargoes between July and September after receiving no offers.

India needs LNG imports primarily for industrial use, relying on coal for more than half of its power generation with gas contributing only 6%. But with low coal stocks and power shortages, India needs additional gas to meet demand.

India, like Pakistan, has issued several unawarded tenders as its buyers struggle to pay high LNG prices. India’s spot LNG imports are down nearly 14% year/year, primarily due to cost, according to India’s Petroleum Planning and Analysis Cell.

Nearly 85% of India’s LNG imports are under long-term contracts with Qatar, the United States, and Russia. With five operating import terminals and plans for eight more facilities, the country’s existing regasification capacity is 42.5 million metric tons/year, according to Mumbai-based ratings agency Crisil.

Bangladesh, reliant on gas for 70% of its energy mix, is dependent on spot LNG imports to offset dwindling domestic gas production.  Bangladesh’s total gas demand is over 4.1 Bcf/d, according to state-owned Petrobangla.

“We’ve not yet decided how many LNG cargoes we will cut, but we will slash importing LNG from the spot market as much as possible as the new austerity measures will reduce consumption of LNG,”  a senior Petrobangla official told local news media.

Bangladesh had previously planned to import up to eighteen spot cargoes for the second half of 2022. It also relies on receiving five or six cargoes each month under long-term supply contracts with Qatar and Oman.

“The fundamental issue with all these three countries is that energy demand is going to explode in the future,” Pai said.

“People live in extreme energy poverty, and so in the medium- and long-term future the power sector will grow 5% to 6% year-on-year,  and the other energy sectors will grow at a similar rate,” he added. “These countries want energy, whether it comes from renewables or whether it comes from coal or gas, and they are betting on every resource to meet their demand.”