Oil, the latest growth engine of the U.S. unconventional boom, is spurting up from the ground at an exceptional pace, which is leading many operators to rethink where — and how — they want to deliver their reserves for the best prices. 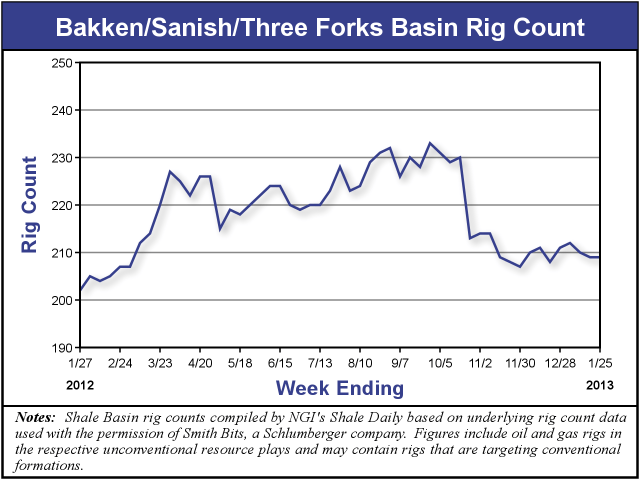 The Department of Energy’s recent report that U.S. crude production climbed 15% year/year in 2012 “appears sustainable…and we are starting to back out of imports significantly so,” according to Tudor, Pickering, Holt & Co.’s (TPH) Robert Kessler.

Onshore North American crude dynamics and their implications on U.S. energy subsectors was the focus of a conference call last Friday by TPH research analysts. The researchers believe that the United States will have 40% more crude oil growth this year than long-time leader Saudi Arabia, and 3.6% more growth than Canada, the next largest non-OPEC country.

The momentum will come from new pipelines, but also expanding rail and barge capacity, as operators focus on where they can fetch the best price, said TPH’s Brad Olson.

U.S. energy analysts now peg oil production growth this year to jump by more than 1 million b/d, aided most by huge gains in the Bakken. From that North Dakota/Montana play alone, TPH this year estimates that:

The eastern market supplies in turn would “overwhelm” Brent-type imports, which were down year/year (y/y) by 335,000 b/d in October. The Gulf Coast pipelines also would overwhelm imports there, which were down y/y in October by 490,000 b/d, said Kessler.

The gusher in the onshore soon will be enough to soon eliminate imports of light Louisiana sweet crude oil (LLS), he said. The United States today is importing about 8 million b/d of LLS. We are taking roughly 1 million b/d in the United States — a substantial volume of pipeline capacity — down to the Gulf and significant rail eastward. Both of those markets’ midstream capacity is twice the amount of remaining imports.

“It’s fairly easy to saturate those markets. By late this year we will eliminate our dependence on light crude imports to the United States. That has significant implications for prices of light crude on the Gulf and East coasts.”

LLS then becomes the “next” West Texas Intermediate (WTI), Kessler said. “It’s a near perfect arbitrage but we think this will change. After light crude fills the Gulf…we have to justify LLS to the next arbitrage, which we think will be Eastern Canada. After it fills up, and the eastern U.S. fills up, we think the spread will be forced into the refining system…”

The Gulf Coast surplus would displace the derivatives markets, said Kessler. Once imports have been backed out of the East Coast by rail, light crudes could be barged to Eastern Canada refineries for about $2.00/bbl. Imports into California would be backed out by rail and potential pipes over time. Onshore crude oil growth “is coming so quick, it’s going to take some time…to tweak factories…”

An estimated 1.3 million b/d of light crude “remains to be displaced” this year in the United States and Eastern Canada, said Olson. The Bakken’s U.S. East Coast deliveries are competing with imports linked to Brent pricing. Close to 30,000 b/d of the East Coast deliveries are barged to Eastern Canada; 275,000 b/d is to head south to the Gulf Coast.

“The Permian directs most of its crude by pipe to Cushing [OK], even though the WTI is better,” said Olson. “The Permian is a perfect example of what’s been going on in the crude pipeline. One is, get away from WTI, the second is to get it to the coast. More Permian production is moving to WTI, and we expect to see a seismic shift in the basin.”

With all of the new capacity moving to the Gulf Coast, “you have to find a home for light oil volumes…refineries are definitely part of the long-term solution,” and several operators have applied to expand, but “permitting these projects generally takes two to three years…A short-term answer lies in barging and tanking. Up to now we’ve only seen it limited to Canada, but that is something to develop over the next several years.”

There is a “pipeline side” and a “crude-by-rail” side, and “rail has made a very big impact in the Bakken…Pipeline utilization has fallen steadily as rail moves to coastal locations versus land-locked price points…

“Pipes are not always the best netback for a producer,” Olson noted. “Some pipeline projects have been canceled in the Bakken,” and he noted that Enbridge Energy Partners LP has protested some pipeline projects because “rail provides a better netback. In the longer term, look to the East and West coasts. With 500,000-600,000 b/d, we see a steady-state equilibrium in crude-by-rail for the foreseeable future.”

For the oilfield services sector, the new crude supplies are a positive, said Olson. There should be more confidence in “differential stability,” which in turn equals more exploration and production (E&P) “comfort.” The well economics in the Bakken, Eagle Ford and Permian “weren’t impaired in the second half of 2012, yet activity fell. All in, our view on differentials is ‘modest positive’ in the near-term.”

For the midstream sector, the stabilization in differentials would lead to less capital spending and “ultimately” to industry consolidation, said Kessler. “In general, the midstream helps to normalize prices and we expect to see that happen this year.”

With more access to their production, E&Ps would see gains on deliverability into multiple high-value coastal markets, Kessler noted. Increased pipeline “connectivity” from the Midcontinent also would stabilize natural gas liquids pricing in the Rockies and Midcontinent, while export capacity increases. And if the United States “can figure it out, Canada can too.”

Midcontinent oil and natural gas activity improved during the first quarter, climbing higher than year-ago levels for the first time since March 2019, according to the Federal Reserve Bank of Kansas City. The Kansas City Fed, as it is better known, compiles energy activity every quarter for the Tenth District, which encompasses firms headquartered in…