Marcellus Shale ethane is a long way from the Mont Belvieu, TX, market center, making it the most likely supply to be rejected in times of surplus. But Marcellus producer Range Resources Corp. has an alternative — and a contract — to deliver some of its ethane to Philadelphia for sale to a European petrochemical producer. 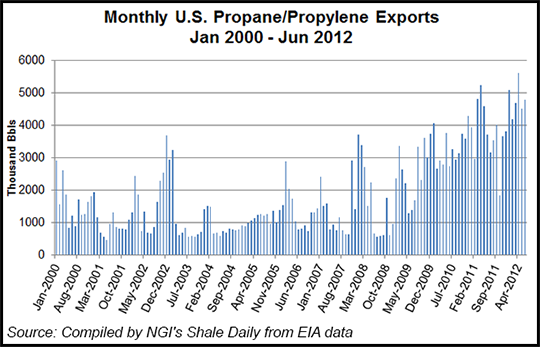 Range has a 15-year agreement with Sunoco Logistics Partners LP to anchor the Mariner East pipeline project, which includes processing and export facilities to connect natural gas liquids (NGL) in southwest Pennsylvania to Sunoco’s port at its Marcus Hook facility near Philadelphia. Range would have firm transport capacity of 40,000 b/d (20,000 b/d of ethane and 20,000 b/d of propane). Once transported to Marcus Hook, the ethane and propane will be fractionated into purity ethane and propane for delivery to domestic and international customers.

A Range subsidiary has struck a 15-year ethane sales agreement with INEOS Europe AG for delivery at Marcus Hook. The agreement is effective upon Federal Energy Regulatory Commission approval of Mariner East. INEOS, a manufacturer of petrochemicals, specialty chemicals and oil products, plans to use its own ships to take delivery of the ethane. Contracted volumes will start at 10,000 b/d in the first half of 2015 and eventually increase to 20,000 b/d, Range said.

“With the Mariner East Project, Range expects to have three significant options that together provide substantial flexibility for ethane and liquids transportation and marketing from our Marcellus operations,” said Range CEO Jeff Ventura. “In addition, these projects are expected to enhance the economics of our core wet gas production and future resource potential value.”

Wells Fargo Securities analysts noted that Range couldn’t comment on pricing for its ethane except to say that overseas it competes with naphtha for “good” prices.

Range “…has indicated [Marcellus] wet gas wellhead prices could be closer to $6.00-6.10/Mcf (up from $5.65) with transportation costs of $0.05-0.10 (significantly lower than the $0.145 costs to send volumes over Atex from committed shippers),” Wells Fargo said in a note. Atex is Enterprise Product Partners LP’s proposed Appalachia-to-Texas (Atex Express) ethane pipeline, on which Range is an anchor shipper (see Shale Daily, Jan. 27).

Overall, Mariner East is subscribed to transport 65,000 b/d of ethane and propane from the MarkWest Energy Partners LP processing facilities at Houston, PA, outside of Pittsburgh, to Marcus Hook. MarkWest itself holds capacity on the project. Propane deliveries are expected to begin in the second half of 2014. Ethane deliveries are expected to start in the first half of 2015 after additional facilities are constructed at Marcus Hook. In the interim, MarkWest is transporting on behalf of Range a portion of its propane sourced from its Houston processing and fractionation complex to the Marcus Hook facilities by rail for sale to domestic and international customers.

“The Mariner East Project will help drive our continued development of natural gas and associated liquids in southwest Pennsylvania, help provide the northeast United States with ample supplies of heating fuel, open the global natural gas liquids market for Appalachian producers and help to serve as a building block for the potential expansion of the region’s petrochemical industry,” Ventura said.

Range would also have access to a pro rata share of the 1 million bbl of propane storage at Marcus Hook and could utilize its full capacity commitment for propane deliveries until the ethane facilities are in place. In addition to Marcus Hook’s truck and rail off-loading facilities, potential exists for Range to deliver propane to Mid-Atlantic customers should Sunoco decide to deliver propane through its northeast pipeline system and expand its existing terminal assets.

“Propane exports are a long-term no-brainer as U.S. propane prices more than 50% below Northwest European pricing today,” wrote Tudor, Pickering, Holt & Co. analyst Brad Olsen in a note Thursday. “Although the Northeast remains a net importer of propane in the wintertime (and therefore is often at premium to other U.S. prices), our April NGL Report predicted Northeast propane going long by 2015, so given proximity to Europe, we saw propane exports as inevitable.

“On the other hand, we were skeptics on ethane exports due to complete lack of ethane-capable petchem facilities in high-cost areas like Europe and Asia. [Range]…proved us wrong…We estimate that [Range] will receive $0.50/gal, or 66% higher than current Belvieu prices. At current ethylene prices, INEOS could see a margin uplift of $60 million per each 10,000 b/d of ethane vs. cracking naphtha, even after estimated transport costs. So the obvious question: why isn’t everyone swimming over to Pennsylvania to get some of that ethane? The integrated nature of many European refining/petchem facilities means that ethane can cause integrated derivative plants to become dependent on high-cost third-party feedstock supply.”

Since July, MarkWest has been transporting a portion of Range and other producers’ propane to Marcus Hook for export to international markets, which are currently paying a price greater than recent Appalachian prices, Range said. During the third quarter, Range participated with Sunoco and MarkWest in the export of 280,000 bbl of propane on two export ships. The current contract provides for propane sales to continue through the remainder of the year. Other short-term propane sale arrangements are expected in the interim using the Marcus Hook facilities until the Mariner East Project is fully operational, Range said.

U.S. propane exports have steadily increase since about 2007, peaking in April 2012 at 5,610,000 barrels, according to Energy Information Administration data.

Range previously signed two agreements to provide for the transportation or sale of ethane processed from its wet natural gas production in the Marcellus. Initially, Range entered into a purchase and sale agreement with Nova Chemical Corp. for the sale and delivery of ethane at the tailgate of the MarkWest Houston complex via the Mariner West Project (see Shale Daily, Sept. 8, 2011) to Nova’s Sarnia, Ontario, petrochemical facilities (see Shale Daily, Sept. 7, 2011).

Range later struck a deal with Enterprise for capacity on Atex to take ethane to the Gulf Coast market at Mont Belvieu.

Sales of ethane to Nova are projected to begin mid-2013, and Enterprise estimates that the Atex project will be online by first quarter of 2014. Volumes to be sold to Nova begin at 5,000 b/d and increase over time to 15,000 b/d. Planned ethane sales at Mont Belvieu will be transported via Atex at an expected initial rate of 10,000 b/d, increasing over time to 20,000 b/d. Each agreement has a 15-year term from its respective in-service date, Range said.

Range said it expects the three agreements will provide long-term assurance of meeting pipeline gas-quality standards by removing ethane from the gas stream and allowing for potential increased development in the liquids-rich, stacked pay area of southwest Pennsylvania.

“With minimum ethane extraction to meet pipeline quality specifications, Range estimates that it has the potential to grow its Marcellus natural gas production, solely from the liquids-rich area in southwest Pennsylvania, to approximately 1.8 Bcf/d,” the producer said. “With typical ethane extraction, the company estimates that these contracts would require approximately 800 MMcf/d inlet gross production by 2016.

“Currently, the inlet wet gas volume flowing into the processing plants is approximately 335 MMcf/d. Range estimates the company would be capable of producing approximately 24,000 b/d of ethane and 10,000 b/d of propane under normal recovery.”

MarkWest is expanding its NGL infrastructure to include new de-ethanization capacity at its Houston, Majorsville and Harrison complexes. By the end of 2014, MarkWest will be able to recover about 115,000 b/d of purity ethane from the Marcellus and will have total fractionation capacity of 275,000 b/d to accommodate the growth in wet gas production.

Range said removing 55,000 b/d of ethane from its gas stream frees up more than 100 MMcf/d of pipeline takeaway capacity without any additional costs. If the full contractual volumes were being delivered using current prices with a portion of its propane being exported, Range estimates these projects would add 35-45 cents/Mcf of incremental value in the liquids-rich area.