A report released last week by the U.S. Department of Energy (DOE) suggests that by 2035 solar energy has the potential to power 40% of the nation’s electricity, or the equivalent of all the nation’s homes. 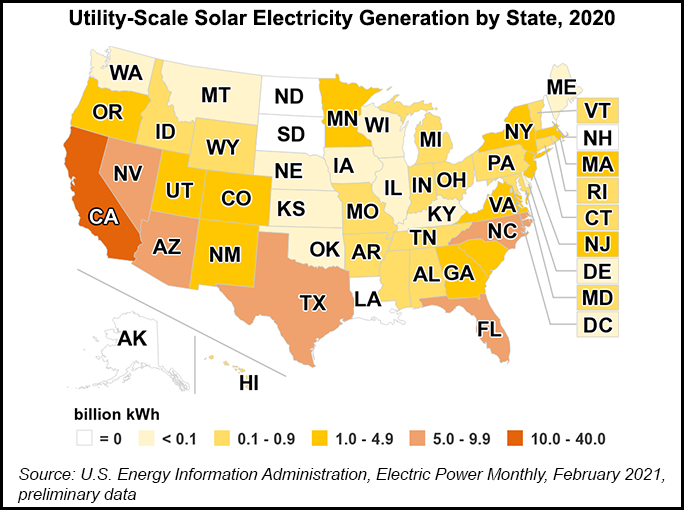 Getting to a 40% supply share, however, would involve a dramatic increase in the deployment of solar. In 2020, the United States installed 15 GW of solar, a record, sending the total to 76 GW. But this figure only represents 3% of the current electricity supply.

The DOE study said that by 2035, the United States would need to quadruple its yearly solar capacity additions and provide 1,000 GW of power “to a renewable-dominant grid.”

“Achieving this bright future requires a massive and equitable deployment of renewable energy and strong decarbonization policies – exactly what is laid out in the bipartisan Infrastructure Investment and Jobs Act and President Biden’s Build Back Better agenda,” said Secretary of Energy Jennifer M. Granholm.

The $1 trillion Infrastructure Investment and Jobs Act passed by the U.S. Senate in August with bipartisan support includes $73 billion to modernize the nation’s electricity grid with new transmission lines that could transport renewable energy from sources such as solar to demand areas and hasten the adoption of cleaner energy sources.

The solar blueprint is part of the Biden administration’s Build Back Better agenda that sets a goal of net-zero electricity emissions by 2035.

“Folks, the evidence is clear, climate change poses an existential threat to our lives and our economy,” President Biden tweeted last Wednesday. “But we can stop it from getting worse. Our Build Back Better plan will make investments to fight the climate crisis, cut emissions and make our infrastructure more resilient.”

This dramatic shift in solar capacity also would need to be accompanied by rapid growth in grid storage, from 30 GW to nearly 400 GW in 2035, the study found.

The projected price of electricity for consumers does not rise by 2035, “because the costs are fully offset by savings from technological improvements.” The shift also could lead to 1.5 million jobs in the solar industry, the DOE said.

But the report said that “Without some combination of limits on carbon emissions and mechanisms to incentivize clean energy, the U.S. cannot fully decarbonize the grid — models show that grid emissions fall only 60% without policy. Continued technological advances that lower the cost of solar energy are also necessary to enable widespread solar deployment.”

New York utility Con Edison Inc. issued a statement saying the company “agrees with President Biden’s assessment that solar energy will play a large role in our nation’s fight against climate change and supports the plan his administration released today.”