Weekly price declines in the Northeast were severe enough that an otherwise firm national market slipped into the red. The NGI Weekly Spot Gas Average fell 9 cents to $3.48, but most other sections of the country were either unchanged or a few pennies higher. 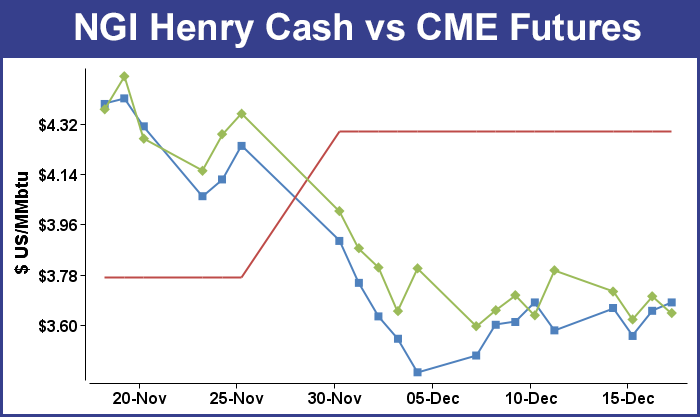 Regionally, Northeast points came in 46 cents lower at $3.23, and the Midwest and South Louisiana were unchanged at $3.80 and $3.55, respectively.

The regions with the largest additions were the Midcontinent, up 9 cents to $3.54 and the Rocky Mountains adding 12 cents to $3.49.

For the week January futures fell 33.1 cents to $3.464, but going into the 10:30 a.m. Thursday release of storage data by the Energy Information Administration (EIA), traders had bid the futures market higher by about 5 cents. Once the 64 Bcf withdrawal figure hit the market, prices added another five cents to $3.805. The number was slightly higher than industry expectations, but well below historical comparisons. At 64 Bcf it was only one-fourth the polar vortex-driven pull of a year ago, but also only 40% of the five year average.

Prior to the release of the data, analysts were looking for a decrease of about 60 Bcf. An analysis by ICAP Energy revealed a pull of 63 Bcf, and IAF Advisors analysts calculated a 61 Bcf decline. Bentek Energy’s flow model anticipated a withdrawal of 60 Bcf.

“We were looking around the 60 Bcf level, and the market was trading around $3.755 when the number came out. This wasn’t much of a higher push at all,” said a New York floor trader. “We are still in our $3.50 to $4 trading range.”

Citi Futures analyst Tim Evans viewed the report as supportive. “The 64 Bcf net withdrawal was moderately above the 60-bcf consensus expectation, implying a slightly firmer supply/demand balance that may carry over into future weeks.”

While Thursday’s report may not have much market impact Teri Viswanath, director of natural gas commodities strategy for BNP Paribas, said, “the market is looking beyond the string of low weekly storage withdrawals to more significant stock reductions ahead.”

Inventories now stand at 3,295 Bcf and are 6 Bcf greater than last year and 258 Bcf below the five-year average. In the East Region 55 Bcf was withdrawn, and the West Region saw inventories increase 1 Bcf. Stocks in the Producing Region fell by 10 Bcf.

In Friday’s trading gas for weekend and Monday delivery had the trajectory of a safe falling from a 10-story building. Most losses were deep into double digits.

New England points took the worst drubbing, close to $1, but Gulf Coast points were down by as much as a quarter. Traders ascribed the steep descent to a lack of weather on the horizon, and futures markets followed a similar path lower. At the close, January was off 17.8 cents to $3.464 and February had shed 17.8 cents as well to $3.498. Spot futures are at the lowest point in more than a year. January crude oil bounced back $2.41 to $56.52/bbl.

Temperature patterns across the country from New York to Denver showed a similar pattern of a rising trend of at or above normal readings. AccuWeather.com forecast that the high in New York City Friday of 38 degrees would hold Saturday but increase to 44 by Monday. The seasonal high in New York is 42. Chicago’s Friday high of 32 was seen rising o 33 Saturday and reaching 41 Monday, 7 degrees above normal. Denver was expected to see its 48 high Friday reach 51 Saturday and ease to 47 Monday, still 5 degrees above normal.

The Mid-Atlantic and Marcellus were shown no mercy either, with hefty losses of their own. Gas headed for New York City on Transco Zone 6 fell 22 cents to $3.54, and deliveries to Tetco M-3 shed 67 cents to $3.54.

In terms of market-moving cold, the best forecasters could come up with in the pivotal Chicago market was for “unsettled” conditions offering a chance at a white Christmas with rain likely. AccuWeather.com meteorologist Jordan Root said, “The chance for a white Christmas is possible for Chicagoland as the weather pattern turns unsettled next week, [yet] a major storm system is set to pass through the Midwest and swing into the Great Lakes through the middle of the week.

“Leading up to the storm, dry weather is expected through the weekend with temperatures on the rise as a surge of warmer air moves in ahead of the storm. High temperatures are expected to move from the upper 30s on Sunday to the low to mid-40s by Monday. As the storm moves in, precipitation will mainly be in the form of rain.”

Traders are in a “show me” mood regarding cold weather. “There have been some forecasts floated that called for cold weather, and so far the market hasn’t seen any,” said Tom Saal, Vice President at INTL FC Stone in Miami.

“The market for cold weather now is from Missouri — show me. The market is going to want to feel cold weather, rather than have it projected. Also, you are looking at a low-usage holiday period with the market struggling to gain any demand traction. This isn’t rocket science. It’s earth science.”

Sometimes there is a disconnect between forecasts and temperatures. The forecasts haven’t changed for “cold” to grind its way into the country, but looking at actual temperatures can reveal the likelihood of a market impact. For example, the high Monday in Chicago of 41 is indicative of temperature (heating demand) trends for the next two weeks. Highs next week in Chicago are no less than 31 and for the week after highs are forecast by AccuWeather.com in the 30s up into the 40s again.

Nonetheless, weather forecasts overnight continued to emphasize the entry of cold temperatures into the Lower 48 during and after Christmas and pointed out that model data could lead to tweaks in the forecast. WSI Corp. in its Friday morning 11- to 15-day outlook said, “[Friday’s] 11-15 day period forecast has trended colder across the southwestern two thirds of the nation, whereas a touch warmer over the Northeast when compared to the previous forecast.

“Forecast confidence is considered near to slightly below average due to increased model uncertainty in the 11-15 day period forecast. While confidence is higher than average with regards to a series of cold air masses to impact the Lower 48, the models are having a difficult time with representing the high-latitude pattern during the 11-15 day period forecast. This suggests that the forecast could change a bit over the weekend as the models better resolve the pattern.

Despite recent weakness, top traders sense an ultimate buying opportunity. “[Thursday’s] trade looked a lot like last Thursday’s as a seemingly supportive storage report was quickly followed by a price plunge of more than 15 cents and a lower close,” said Jim Ritterbusch of Ritterbusch and Associates in closing comments Friday to clients. “This type of price action strongly suggests that our anticipated support at the $3.55 level could be tested within the next couple of trading sessions. We may look to probe the long side for a trading turn on such a development as updates to the short term temperature views still appear tilted in a bullish direction.

“Although expected deviations from normal don’t appear severe when looking out toward month’s end, storage withdrawals will likely be stepped up considerably following next week’s release. As far as [Thursday’s] data was concerned, the 64 Bcf injection exceeded average street ideas by some 3-4 Bcf while finally eliminating the long standing deficit against last year. From here, we look for the year over year surplus to increase appreciably since the upcoming January-February period is highly unlikely to repeat last year’s frigid trends. Overall, we still expect a near term trading affair but we will be looking to approach the long side of February futures on a further price pullback of around 10-12 cents.”