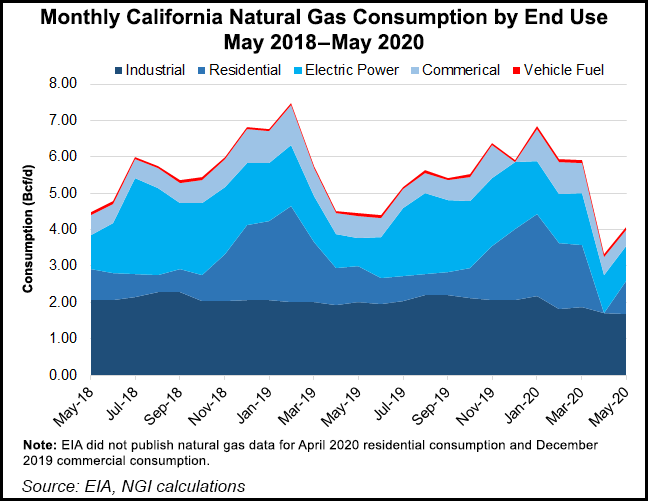 Joined by the Utility Workers of America Locals 132, 483 and 522, as well as Newport Beach, CA-based Clean Energy Fuels Corp., the lawsuit asked the court to vacate the natural gas portion of the CEC’s 2019 Integrated Energy Plan Report (IEPR).

The trio of plaintiffs seeks to force the CEC to rewrite the gas report to comply with Assembly Bill (AB) 1257, the state Natural Gas Act. “The law makes clear that the CEC must develop a standalone report every four years, identifying strategies and options that maximize the benefits of the state gas grid,” said SoCalGas’ Andy Carrasco, chief environmental officer.

Carrasco said the lawsuit is necessary because the CEC allegedly refused to update the report, despite what he called “extensive technical feedback.” The state agency’s gas report needs to reflect the intent of AB 1257, he said.

In the court filing, the plaintiffs argued that the 2013 legislation puts state lawmakers on record as supporting greenhouse gas (GHG) emissions reductions through use of the gas grid in the state. It further established that the gas system was “critical” to keeping the state’s energy supply “affordable and reliable.”

The 2019 IEPR, which was finalized in February, includes a natural gas chapter that views the fuel and the state’s extensive transmission and distribution pipeline network as in a transition because of state electrification policies and mandated climate change mitigation measures.

Among the report’s key findings are the assumption that alternative energy sources will slowly push out fossil fuels; aging gas infrastructure and the cost of maintaining it need to be assessed in light of electrification; and eventually the gas transportation system could be used for renewable natural gas or hydrogen.

In a joint statement, the three local union presidents representing 5,000 SoCalGas employees said they were joining the lawsuit “to bring the CEC back into compliance with California law concerning how to fuel the world’s sixth largest economy,” alleging that the state agency has “embarked on a self-guided excursion into fuels policy that, contrary to law, would minimize use of natural gas.”

Meanwhile, SoCalGas also is butting heads with California regulators over subpoenas regarding lobbying practices. The utility is said to have refused to provide full accounting information to the California Public Utility Commission’s Public Advocates’ Office (Cal Advocates) for lobbying/public education work, arguing it has a right to shield proprietary and other confidential data that does not involve ratepayer funding.

Cal Advocates has been examining what it alleges is the use of ratepayer funds by SoCalGas to pay for anti-decarbonization campaigns, including promoting the use of natural gas and renewable natural gas through a utility created consumer front group, Californians for Balanced Energy Solutions.

Cal Advocates attorney Traci Bone, in a filing to CPUC, said there also is an effort by the utility “to defeat state and local laws proposing to limit gas use.”

SoCalGas spokesperson Christine Detz said there is a “gray area” in the CPUC rules on utility advocacy work regarding local government and community lobbying. SoCalGas is advocating the CPUC put “more transparency and greater public participation in energy policy decisions.”

The utility is seeking clarity covering lobbying and education activities, given increasing pressure on investor-owned utilities to promote decarbonization. State Senate Bill 1383 requires that 40% of the methane captured come from waste stream sources. More than 80% of California’s fugitive methane emissions are from sources covered under the law.

“Given the importance of the gas grid to keeping energy bills affordable, the electric grid reliable, and to meeting the state’s climate goals, we hope the CPUC will move quickly to address these important issues,” Detz said.