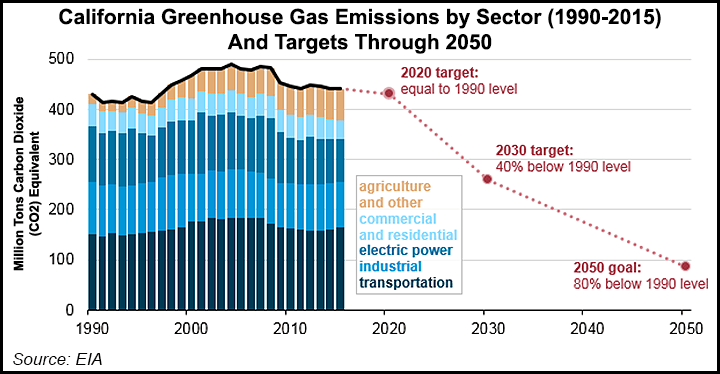 Citing the global United Nations climate accord reached in late 2015, the Sempra Energy utility joined other U.S. gas distributors that have made greenhouse gas (GHG) reduction commitments. The Los Angeles-based company committed to phased steps over the next five-, 10- and 15-year periods to curb emissions from its buildings, fleet vehicles, pipeline networks and end-use customers. SoCalGas said it would invest in initiatives to “decarbonize, diversify, and digitalize.”

“We’re going to see overall demand for energy rise as the number of energy uses that we plug in today continues to rise. As we decarbonize energy, the demand on the electric grid is going to go up, and the value of the pipeline infrastructure to support the variability in demand at increasingly high levels of input is going to be very important.”

Drury outlined a strategy that combines using renewable natural gas (RNG), hydrogen and carbon capture. McKinsey & Co. Inc. is tasked with developing a strategy by year’s end. The utility then plans to work to “fully articulate” what the mix of tools will be and how best to deploy them.

“We think you will see even more integration and tighter dependencies among energy networks, whether electric or gas, and we need every tool that is available to us collectively so we ought to be developing each of those tools, deploying them in the most thoughtful ways,” Drury said.

“And if we are not successful on them collectively, then we will not be successful…I don’t think there is anything we should eliminate as a potential tool for decarbonizing California or the nation.”

By 2030, major goals call for completely eliminating gas venting in transmission pipeline maintenance; net zero energy for 50% of existing utility buildings; and 20% of system supplies  being RNG. By 2035, the utility over-the-road fleet is to be zero emissions. All utility buildings by 2035 are set to be net zero.

“As we move through regulatory cycles over time, you will see increasingly more investment in decarbonization between now and 2045,” Drury said.