A fraction of the base supply of 15 Bcf of natural gas was withdrawn Tuesday and Wednesday from the closed Aliso Canyon underground storage facility by its owner/operator, Southern California Gas Co. (SoCalGas), the Sempra Energy utility reported on Thursday. 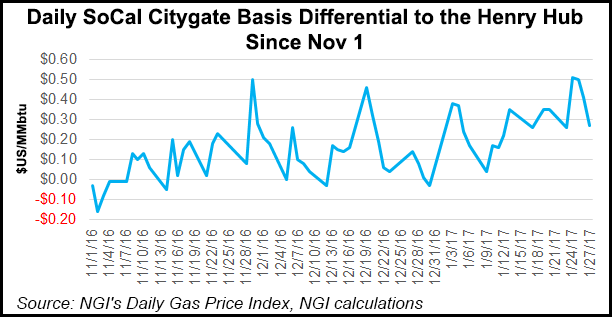 There is still about 14.8 Bcf in the 86 Bcf capacity gas storage field on the northern edge of Los Angeles, according to SoCalGas. Withdrawals totaled about 50 MMcf, with 30 MMcf being taken out Tuesday at an hourly flow of 13 MMcf.

On Thursday afternoon SoCalGas lifted an advisorythat had been in effect since Monday, calling off a system-wide curtailment watch for its largest (noncore) customers, including large industrial/commercial customers and power generation plants.

“On Tuesday and Wednesday cold weather conditions led to hourly customer demand on SoCalGas’ system that significantly exceeded gas supplies being delivered through interstate pipelines and the company’s other storage facilities,” the utility said.

On those two days, SoCalGas experienced its highest daily demand so far this winter, delivering nearly 4.1 Bcf each day.

SoCalGas maintains that without withdrawals from Aliso Canyon, system demand on Tuesday and Wednesday could have resulted in curtailments to large customers. During the withdrawals, a newly installed methane emissions monitoring system at the storage field showed only “normal levels” of methane, the utility said.

Separately, state officials and activists seeking to close Aliso Canyon permanently were active in their contrasting efforts. The California Energy Commission (CEC) directed about $4.5 million in natural gas research grants to the Southern California region while the Food & Water Watch (F&WW) coalition accused the gas utility of manipulating its gas supply operations to make it appear that the storage field was critical to avoiding curtailments.

F&WW and the Save Porter Ranch residents’ group near the storage field scheduled a rally near the facility for Thursday night and reiterated a plea asking California Attorney General Javier Becerra and Los Angeles City Attorney Mike Feuer to “immediately open an investigation into unfair business practices by SoCalGas and its parent company, Sempra Energy.”

The opponents are expected to show up in numbers at two public hearings Wednesday and Thursday to make their case.

“The research projects will be located in Los Angeles and Orange counties to help mitigate impacts from the Aliso Canyon storage facility,” CEC said.