Severe heat hit Southern California Monday, driving temperatures into the triple digits and spiking the highest statewide electricity demand of the year with more to follow on Tuesday, but the taxed natural gas system appeared to be holding up, even with the state’s largest underground gas storage field closed. 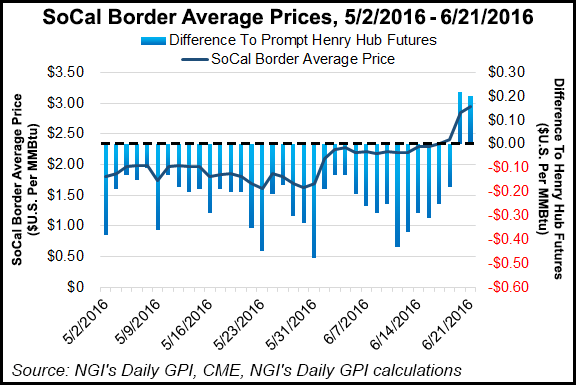 “SoCalGas is doing everything in our ability to support energy reliability throughout this heat wave. Throughout the past weekend and into this week, we are working in very close coordination with the California Independent System Operator [CAISO] and other agencies, as well as our electric generation customers, to monitor supply and adjust operations as needed to optimize [natural gas] reliability.”

SoCalGas’ real-time online system on its operations showed in excess of 3.2 Bcf of scheduled volumes Monday with more than 320 MMcf of unused capacity on the system. The projection was for scheduled volumes to stay above 3 Bcf/d for the rest of the week with the unused capacity shrinking to 68 MMcf on Friday. SoCalGas’ overall storage capacity (including the 86 Bcf closed Aliso Canyon facility) is about 132 Bcf and the utility showed 64.2 Bcf in storage on Monday.

The sudden severe heat is the type of peak electrical load scenario for Southern California that has had the concern of state energy officials for several months, and the state grid operator, utilities and others have been urging extra conservation efforts by the public to help mitigate against the peak load pressures. State officials have warned against gas supply imbalances that could cause up to 14 days of rolling blackouts this summer (see Daily GPI, April 5).

Following the four-month storage well leak at the Aliso Canyon underground facility, the state has become a poster child for the increasing interdependency between natural gas and electricity grids (see Daily GPI, May 12).

With Aliso Canyon essentially shut down, except for 15 Bcf of reserves to be used only in an extreme emergency situation at the direction of the California Public Utilities Commission, state and local officials have emphasized that 80% of the gas used in the greater Los Angeles Basin in the summer goes to generate power. The intricate delivery system for providing that gas has been upended by the unavailability of gas from Aliso.

No gas has been withdrawn for Aliso Canyon since late January, “in accordance with state direction,” the SoCalGas spokesperson said. “The need for and potential impacts associated with withdrawing gas from the field due to the heat wave have not been determined.”

On Monday, CAISO chalked up a peak demand of 44,353 MW, by far its highest of the year, and it forecast demand statewide topping 45,000 MW on Tuesday.

While CAISO and the Los Angeles Department of Water and Power urged customers to cut back on electricity use, the California Energy Commission and Department of General Services was directing operators of state facilities to cut power use at everything from parks to hospitals to prisons.

On Sunday night a localized curtailment was issued by SDG&E due to an outage of a Blythe compressor station on the Arizona-California border, affecting some electric generation customers in San Diego County, but it was not related to Aliso Canyon. The curtailment was lifted at 12:40 a.m. PDT Monday, the SoCalGas spokesperson said.