A Southern California Edison Co. (SCE) power line may have been involved in the start of a wildfire raging in a foothills portion of Orange County, officials at parent company Edison International (EI) said Tuesday. 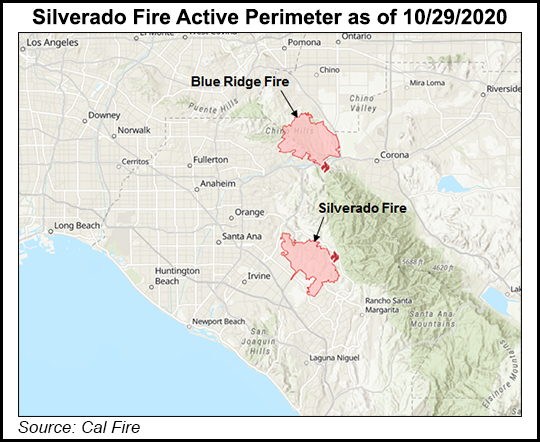 SCE earlier this week told state regulators the 11,000-acre Silverado Fire in Orange County was 5% contained, and there “was no activity” on a power line near the fire’s starting point.

According to EI CEO Pedro Pizarro, “preliminary investigations suggest a lashing wire attached to a telecommunications line may have contacted the power line above it, possibly igniting the fire.” He cautioned during the 3Q2020 conference call that it was too early to “draw any definitive conclusions.”

“The fire suppression efforts have been really strong this year,” Pizarro said. “I would hazard a pretty good guess that if we would have had this fire season three years ago, before the state had significantly increased its firefighting capabilities, we might be seeing a much different level of damage across the state.”

Pizarro said the tone from state regulators and lawmakers has been more positive. He said utility wildfire mitigation plans were making a difference. There also is an opportunity for more capital investment to build smart utility grid capabilties in response to climate change and rising fire risks.

“We’ve worked really hard in continuing to learn, and since the fires in 2017-18 we had a radical revision of how we think about wildfire risk on our system,” Pizarro said. “While we are focused on the fire risk, we also keep our eye on the long term, which is doing something about climate change.”